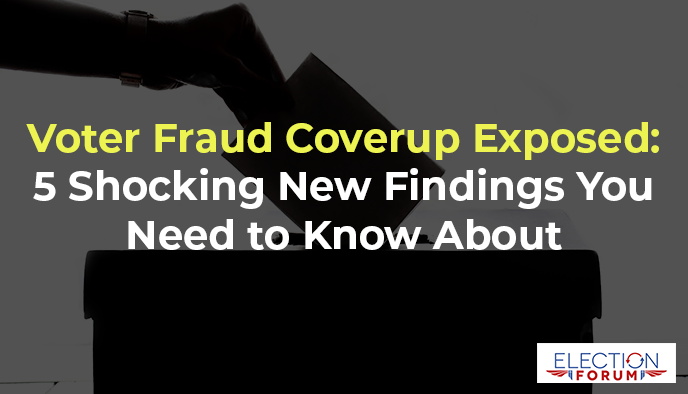 But there are 5 new and shocking proofs that massive, election-changing voter fraud does in fact exist.

And it must be stopped before the 2020 election.

Fair elections are fundamental to a Democratic Republic.

In past issues of this newsletter and in chapter 11 of my book, The Deep State: 15 Surprising Dangers You Should Know – available here – I’ve exposed proof of voter fraud nationally.

Here are 5 critical voter fraud findings you should know about:

It has also verified that about 58,000 non-citizens have voted since 1996. This could easily change election outcomes where races are won or lost by less than 5,000 votes – which is about all of them.

From now on, the Secretary of State of Texas will compare newly-registered voter names with federal immigration records at the Department of Homeland Security.

Expect more voter fraud to be verified in the state of Texas. It’s great to see Texas taking this issue seriously.

The Democrat governor admitted the discovery but tried to keep it quiet.

Much more verification is needed. But 11,198 fraudulent votes could have impacted tight races already.

Thanks to a lawsuit by the Election Integrity Project and Judicial Watch, this cesspool of potential voter fraud finally might be cleaned up.

It must be fixed before the critical 2020 election.

There was no study done on how many fraudulently voted in 2016 or 2018. The Deep State bureaucrats and Democrat politicians who control California refuse to do it. They say there is no voter fraud in the state, so why look.

They need to be held accountable.

California’s “Motor Voter” registration program (see “Massive Cover-Up: California Motor Voter Fraud” [https://www.craighuey.com/california-voter-fraud/]) is rife with fraud. Everyone can automatically register to vote when they get their DMV ID – with no confirmation or proof of citizenship.

Now it’s been revealed that both the California Department of Motor Vehicles (DMV) and county election officials told Secretary of State Alex Padilla not to force the program to be used for the 2018 election because they weren’t ready.

He did it anyway.

More “errors” are yet to be yet verified. And no investigation or verification is being acknowledged.

Over 800,000 new voters were added to the voter rolls under the Motor Voter program.

The Democrat Secretary of State likes the results so far:

The #1 goal of the Democrats and socialist groups like Obama’s Organizing for Action is to take over state legislatures and governorships in 2020.

So Democrats will be in charge of redrawing state and congressional voting districts for all elections until the next census in 2030.

Gerrymandering state and federal legislative districts to the advantage of Democrats will result in more election wins for Democrats over the next 10 years.

Expect more revelations and verifications of fraud to come.

We urgently need election integrity and fairness in 2020.

The Department of Justice should investigate.

In all 50 states we need citizenship verification.

Here are 4 actions you can take to help stop voter fraud:

Also watch this video about why Texas Attorney General Ken Paxton is concerned about voter fraud in his state (6 ½ minutes).

One Comment on “Voter Fraud Coverup Exposed: 5 Shocking New Findings You Need to Know About [Videos and Petition]”