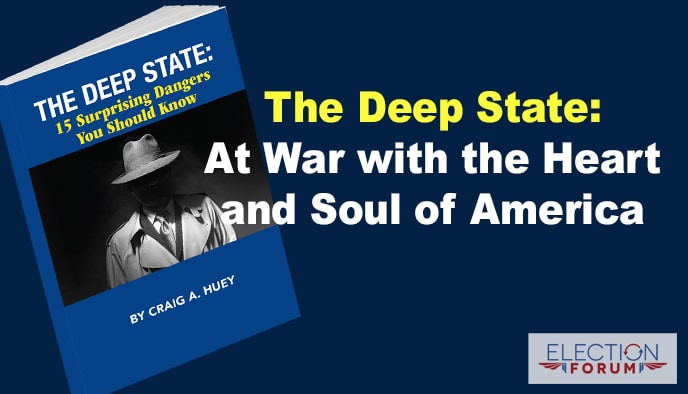 The Deep State Threatens Your Freedom, Your Family and the Future of This Nation…Here’s What You Must Know to Protect Yourself.

The Liberal media likes to tell you “the Deep State doesn’t exist.”

They’ll tell you it’s a fabrication … a lie.

Newscasters on CNN or MSNBC will mock anyone that talks about the Deep State.

Magazines like The New Yorker and Vanity Fair have called it a “conspiracy theory,” the result of “paranoia,” and a “radical theory.”

Some of your friends on Facebook or Twitter may even ridicule the Deep State, making fun of people who see its manipulative power at work in the government, media and culture.

But the truth is, the Deep State is no “myth.” It’s a dangerous reality spread throughout our government…our culture…our businesses…even our schools.

The first thing you must know is that the Deep State has an agenda.

It wants to destroy:

The Deep State’s intent is for you to be ignorant of the truth, so it can expand its power and resist anyone that disagrees with its progressive agenda.

For forty years, I’ve watched the Deep State operate throughout our government bureaucracy, destroying small businesses, crushing innovation and job growth … and destroying freedom with its arbitrary rules and abuses of power.

In more recent years – under the Obama administration – I watched the Deep State advance through all branches of the federal government with alarming speed, adding a political and ideological agenda to its bureaucratic juggernaut.

Now, as President Trump has called out Deep State strongholds of power within government agencies, I’m watching the Deep State rear its ugly head. Its agents are furious at being exposed and called to account.

I believe the Deep State is one of the greatest dangers to America today – to your rights, your freedom, and everything you value and have worked so hard for.

I wrote the book, The Deep State: 15 Surprising Dangers You Should Know because it’s critical that you know about the Deep State – and can recognize it when you and your family are being targeted.

In The Deep State: 15 Surprising Dangers You Should Know, you’ll discover:

You’ll learn about every stronghold of Deep State Power, placed strategically throughout:

But there’s good news: You can fight back.

In The Deep State: 15 Surprising Dangers You Should Know, you’ll also learn how to fight the Deep State’s agenda…and defend your freedom, your values and your security.

You’ll learn how to take a stand – for freedom, honesty and truth.

I’m so convinced that The Deep State: 15 Surprising Dangers You Should Know is a critical resource for every American, I’m offering it for 20% off.

That means for a limited time only, you can purchase The Deep State: 15 Surprising Dangers You Should Know for only $19.95 (regularly priced $24.95).

And, when you order today, I’ll sign a copy just for you – so that you get a limited edition, autographed copy.

If you’re interested in learning the truth…horrified as you might be, buy The Deep State: 15 Surprising Dangers You Should Know today.

Nowhere else will you find this information…

The idea of the existence of a Deep State network of career politicians and unelected bureaucrats – working behind the scenes to control government policy – has been mocked, scoffed at and laughed at by the media and progressives…

The recent revelations from high-ranking FBI and CIA officials have exposed a conspiracy to influence government policies … undermine President Trump’s agenda … and even manipulate the outcome of a presidential election … far deeper and more sinister than anyone ever imagined.

Order now at a special discount by clicking here: www.deepstatebook.com

There’s a link on this page to amazon.com if you want to buy the book or the Kindle version from Amazon.