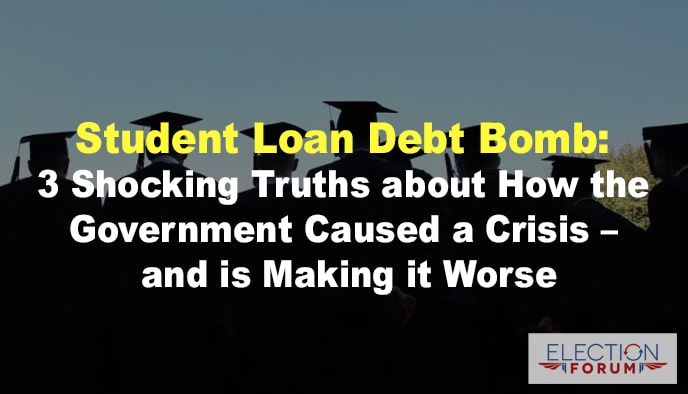 Put another way, college student loan debt is more than 1/3 of the entire projected federal tax revenue for fiscal year 2019!

The cause of the massive debt increase over the past 12 years? The federal government.

Here are 3 shocking truths explaining how – and why – it happened:

When these adjustable-rate mortgages (ARMs) ratcheted up to market interest rates, thousands of low-income home buyers defaulted on their loans because they couldn’t afford the higher payments.

The loan defaults caused Lehman Brothers – a huge bank that was heavily invested in subprime mortgages – to declare bankruptcy in September 2008.

Many workers subsequently lost their jobs during what is now called “the great recession.”

They decided to go to college – with the idea it would lead to a higher-paying job that would enable them to pay off their student loans.

For many, the higher paying jobs didn’t materialize … so they became saddled with a debt they couldn’t afford to pay since their income didn’t increase as expected.

Why did tuition also surge during and after the financial crisis?

Because state budgets were squeezed, resulting in fewer dollars available for public colleges…

Most colleges had to raise their tuition due to the reduced state funding … requiring students to take out larger and larger student loans.

The skyrocketing college tuition costs and the ever-increasing student loan amounts required to obtain a college degree haven’t subsided in response to the economic boom of the past 2 years.

But a new study claims the federal government isn’t the solution to the student loan crisis; it’s the problem.

The study, “Accounting for the Rise in College Tuition” – published by the National Bureau of Economic Research – concluded that “demand shocks” from federal loans, subsidies and aid “lead to higher college costs and more debt, and in the absence of higher labor market returns, more loan default inevitably occurs.”

The data showed conclusively that the growth of the Federal Student Loan Program alone accounts for the entire rise of college tuition from 1987 to 2010!

Whenever government subsidizes anything, the following occurs:

As former President Ronald Reagan famously said, “The nine most terrifying words in the English language are: I’m from the government and I’m here to help.”