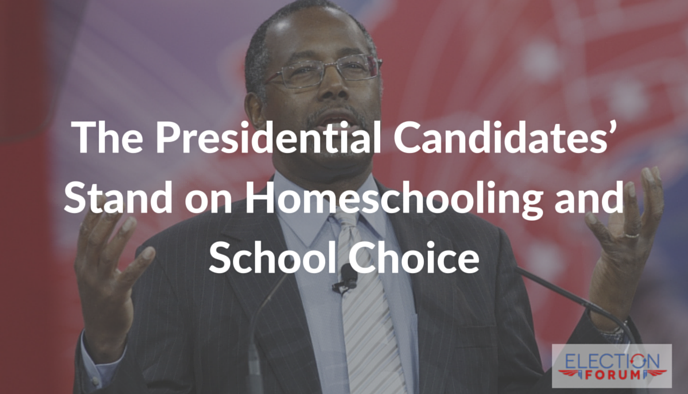 Education reformers call this school choice, charter schools, vouchers, even opportunity scholarships. I call it competition-the American way.” Trump seems to be a good supporter of school choice and homeschooling considering that he wishes for more competition in the education system.

He is a moderate supporter of homeschooling. He supports school choice; however, he does not support it as strongly as other Republican candidates.

He is a strong believer in school choice, and he also believes that America’s public school system is holding kids back.

He signed NJ onto common core, but he now regrets that decision. Overall, he is mediocre when it comes to school choice. While he advocates for school choice, he does not make it a primary issue or concern.

She believes that the common core system is failing. Not an incredibly big supporter of homeschooling and school choice.

He believes that the current public education system has become a massive propaganda system. Furthermore, he supports homeschooling very strongly.

He favors charter schools where independent groups receive state authorization and funding to establish new schools. Bush says, “Our education proposal would allow vouchers for children in chronically failing schools so that they could attend another public or private school.” He is not an incredibly strong supporter of school choice.

He stated the following: school choice for all: public or private for all kids, replace entire school board for failing schools, support displaying the Ten Commandments in public schools, ending school prayer was one step in society’s moral decay. He is one of the strongest supporters of school choice and homeschooling.

Wanted to award 10.2 billion dollars to federal education and HHS projects. He opposes school vouchers, and he does not favor homeschooling or school choice. Strong proponent of the public education system.

Rated 27% by the NEA, indicating anti-public education votes. He favors homeschooling and school choice. He believes the education system is not working.

Raise teacher pay with local funds. More support for traditional African-American universities. Moment of silence does not infringe on students’ rights. Calls for a voucher plan in Virginia schools. Does not strongly support homeschooling or school choice. He wishes to hire more public school teachers.