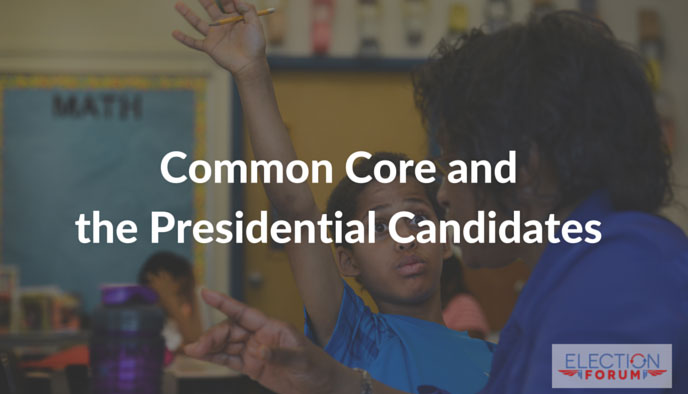 Finding out where the candidates stand on Common Core, especially the Republican candidates,  is tricky.

Many are accused of flip-flopping on this issue for political gain – that their opposition is not genuine.

It’s not enough to take them for their word. We have to look at what they’ve said and supported in the past, and we also must look at their actions concerning Common Core.

We try to give as much relevant information as possible so that you can determine how trustworthy each candidate’s current statements are.

“[Common Core] was about coming up with a core of learning that we might expect students to achieve across our country, no matter what kind of school district they were in, no matter how poor their family was. That there wouldn’t be two tiers of education.

“Iowa has had a testing system based on a core curriculum for a  really long time. And you see the value of it. You understand why that helps you organize your whole education system. A lot of states, unfortunately, haven’t had that. So [they] don’t understand the value of a core, in this sense a common core. Of course, [then] you can figure out the best way in your community to try to reach.”

She also called education “the most important non-family enterprise.”

Hillary has been dancing around the issue and has not said much. A couple of explanations are: (1) her deep ties with teacher’s unions, which are now frustrated with Common Core and (2) internal division over Common Core within the Democratic Party.

However, she was centrally involved with the Goals 2000 project – a strategy for nationalizing American education using federal grants.

“That’s why we are choosing to adopt the Common Core Standards. New curricula that will prepare our kids to be winners in a global economy.”

“ESEA… supports states, like Vermont, that have adopted the Common Core Standards so students are taught the skills they need to be in college and career ready.”

In 2015 he voted against a measure that would have allowed states to opt-out of Common Core without being financially penalized.

“In my view, the rigor of the Common Core State Standards must be the new minimum in classrooms…. For those states choosing a path other than Common Core, I say this: Aim even higher, be bolder, raise standards and ask more of our students and the system.”

Bush has been a vocal supporter of Common Core.

But in the first GOP debate, he seemed to indicate a withdrawal of his support. He said that the term Common Core has become “poisonous.”

The “idea” of Common Core is for “students in every state to be given the opportunity to compete with every other student… I want kids to jump higher.”

“The curriculum to meet [high] standards… is set by local school boards.”

Strongly supported Common Core as late as 2013, when most other Republicans were switching. Only announced opposition in April 2015.

May 2013: “Parents and people involved in their local schools should let it be known that core standards are valuable, and they’re not something to be afraid of—they are something to embrace.”

” Sadly, the very label Common Core has come to be associated with things I detest, like agenda driven curriculum that indoctrinates instead of educates. I’m convinced that the term Common Core needs to disappear from the lexicon of education policy. It’s a toxic term because it’s come to mean things that most of us can’t stomach, like top-down federal intrusion into the local schools where you live.

“Let’s kill the name Common Core and all the nonsense that’s been tacked on to it. But let’s insist that if we continue to spend the most money in education we demand that the end result is achievement. Every Governor should take the wheel and steer his or her state to adopting strict and rigorous standards. Keep it simple; name it what you will. Don’t let anyone corrupt the goals by adding things not part of the goals. Common Core is dead. But common sense shouldn’t be.”

Huckabee now says that he opposes Common Core because it became something else: with the Obama Administration’s involvement with Race to the Top, involvement in curriculum, data collection, and other aspects that weren’t originally part of Common Core.

But, in his book A Simple Government, he praises the Race to the Top program (which had been ongoing for two years). Also, the Obama Administration has done nothing new in terms of curriculum since 2013. And data-collection has been happening since the beginning.

Also supported Common Core in 2013. Now says he is against it.

He announced in June 2015 that New Jersey is going to review Common Core standards. However, NJ is keeping the Common Core test (PARCC).

“The last thing we need is another Bush. He’s totally in favor of Common Core – that’s a disaster – it’s bad. It should be local and all of that.”

“I am totally against Common Core.”

In 2012, he was pro Common Core. He helped implement it as Gov. of Louisiana.

But not anymore. We listed him as an opponent because of his actions – he’s genuinely fighting Common Core.

In 2014, he joined a lawsuit to sue the Obama Administration over Common Core.

In May 2015, Louisiana passed legislation to eventually pull out of Common Core.

In June 2015, he announced plans for Louisiana to pull out of Common Core immediately. He is now appealing an injunction to stop his efforts.

“President Obama has been focused on nationalizing what is taught in each of our nation’s schools since he was sworn into office. The President’s flagship ‘Race to the Top’ competitive grant program was used to entice states to adopt the K–12 standards developed by a joint project of the National Governors Association and the Council of Chief State School Officers. Also, in the President’s 2009 Blueprint for Education Reform, it is suggested that the adoption of these common standards could one day be a qualification for states wanting future Title I dollars for low-income schools.”

“I have many concerns about the constitutionality and transparency of the Common Core State Standards Initiative as well as the loss of local control of curriculum and instruction.”

His voting record has consistently fought against federal control of education and fought for the rights of parents and states.

“We need to repeal Common Core. We need to get the federal government out of the business of dictating educational standards. Education is far too important for it to be governed by unelected bureaucrats in Washington. It should be at the state level or even better at the local level.”

“The federal government never knows when to stop. When [it] starts taking, it never gives back and, quite frankly, I don’t think we need a National School Board. I think that we have local school boards for a reason because that’s where parents can most influence the process and get good results.”

“Common Core is not school choice. I do believe in standards, but those standards obviously are set by parents and people who do home schooling or they wouldn’t be doing so well.”

“From its beginning, the Common Core State Standards initiative has flown under the radar. Its funding, its implementation, and the substance of the standards it proposes have received little public attention, but all of them are wrong for families, wrong for students, and wrong for our teachers.”

“What troubles me the most is how fast these standards were adopted and how little transparency there was in the process. Not one state legislature voted on the Common Core standards. In the forty-five states where they have been adopted, it was by an act of the governor, the state secretary of education, or the state board of education. The people most affected by this enormous policy change – parents and teachers – never had a chance to weigh in.”

“America’s future prosperity requires that changes be made to Common Core. The facts are pretty clear, the bigger our education department becomes, the worse our public education becomes. There’s no connection between spending more money in our nation’s capital and a better school system. Parents should be given choice, competition, and accountability in the classroom.”

That’s it for the candidates.

Hope you can make it!

5 Comments on “Common Core and the Presidential Candidates”