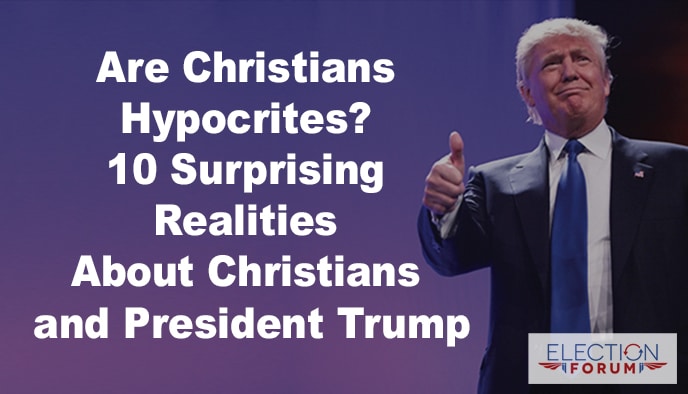 Are evangelicals hypocrites if they are supporting President Trump and his policies?

Why did a record 81% of evangelical Christians vote for Donald Trump in the 2016 election?

Why do so many evangelicals continue to support him in spite of the Access Hollywood tape and all of the allegations of sexual misconduct in the past against him?

Isn’t it hypocritical that Christians were harshly critical of President Clinton’s sexual misconduct, but are giving President Trump a pass?

Here are 10 surprising realities about why the vast majority of Christians are supporting the president:

1. Christians recognize that there’s no way to know whether or not unproven allegations are true.

We live in a toxic environment today … We’ve completely forgotten the presumption of innocence until proven guilty.

And even if the charge is later proven false … or the accuser recants … it’s too late – the damage has been done.

The accusations against President Trump are for alleged behavior from 10 or more years ago.

If this were happening today, his evangelic support wouldn’t exist.

2. Christians took a chance on Candidate Donald Trump – and most are happy.

There never has been and never will be a perfect presidential candidate.

We are all sinful, morally flawed people.

The choice in the 2016 election was between:

Evangelical Christian leaders have never attempted to rationalize or excuse immoral behavior of any kind – whether actions or words.

And we should never be silent in the face of wrongdoing

Candidate Trump admitted to his vulgar, inappropriate talk on the Access Hollywood tape.

He said: “I’ve never said I’m a perfect person, nor pretended to be someone that I’m not. I’ve said and done things I regret… I said it, it was wrong, and I apologize.”

4. Americans can only hold the president accountable for what he does while in office.

No one can do anything about the past – it can’t be erased or changed.

5. President Trump has kept the promises he made to evangelical Christian leaders – and to all Christians – during his campaign.

He has kept all of these promises – and much more.

Candidate Trump put his promise to nominate pro-life judges in writing and released it to the nation.

No other Republican nominee has ever pledged in writing to nominate pro-life judges.

If President Trump stops keeping his promises or reverts to his past inappropriate behavior, Christians will leave his base of support.

He appointed Governor Sam Brownback (R-KS) to be Ambassador-at-Large for Religious Freedom.

After a 6-month delay, Governor Brownback finally has been confirmed by the Senate.

He is seeking to dismantle the Johnson amendment, which threatens churches and other religious organizations with loss of tax-exempt status if they engage in political campaign activities or endorse or oppose candidates for elected offices.

8. President Trump is bringing positive changes to the U.S. that are benefiting all Americans.

No one can deny that the economy and stock market have done extremely well during President Trump’s 1st year in office.

Many predicted a stock market crash if Trump were elected.

Consumer confidence is higher than during the past 8 years.

New business startups are up

Large corporations are bringing capital held overseas back into the U.S. because of the corporate tax rate reduction.

9. Christians know we didn’t elect a pastor … we elected a president.

We look to our pastors and Christian leaders for moral leadership…

We look to a president for honesty, integrity … one who keeps his word … one who is a good persuader and negotiator … one who will put the interests and the security of Americans first in domestic and foreign policy matters.

10. There will always be things not to like about President Trump … but the positives of his presidency far outweigh the negatives.

As Christians, we recognize that we can’t expect to ever have everything we want…

We must accept and deal with what we have … what we’ve been given.

We may not like his brash tone or his habit of hitting back when verbally attacked.

We may cringe at his less than tactful tweets…

Nevertheless, we are giving reasoned support for a political leader who is doing everything within his power to keep his campaign promises.

So, despite the media … no, you are not a hypocrite if you support President Trump’s policies. You are acting based on his positive initiatives and his commitment to keeping his word.

43 Comments on “Are Christians Hypocrites? 10 Surprising Realities About Christians and President Trump”