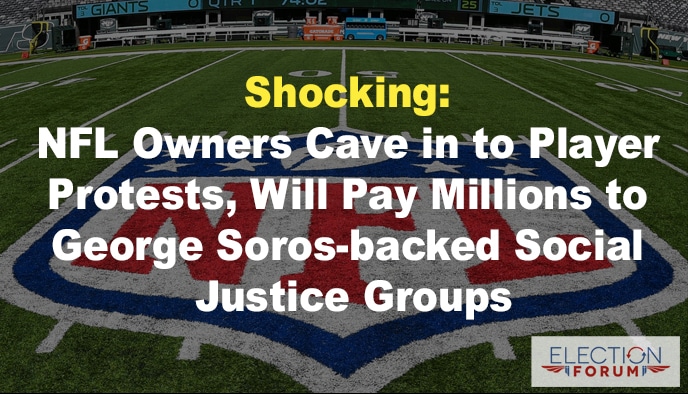 Under an agreement with the Players Coalition, the NFL owners plan to funnel $89 million over 7 years to the following causes:

The Center for American Progress is a leader of the anti-Trump “resistance” movement.

The Dream Corps is also linked to George Soros, and has called for saving the Clean Power Plan, cutting the prison population by half, and providing “sanctuary for all.”

The $89 million will be distributed to both local and national efforts.

On the national side, the owners will pay $73 million over 7 years as follows:

The Hopewell Fund is managed by Arabella Advisors which is a major player in the environmental movement.

About 40 players led by Malcolm Jenkins, a Philadelphia Eagles safety, were involved in the Players Coalition. That’s a small percentage of the 1696 players on the 32 NFL club rosters.

The NFL Players Association, which is the players’ union, was not involved in the talks.

Some players have criticized the proposed agreement as inadequate. Others have accused the NFL of planning to finance the deal by diverting funds from Salute to Service and Breast Cancer Awareness, its current charitable efforts.

A formal agreement has not yet been finalized. According to ESPN, the agreement will need to be approved by the owners collectively at the annual league meeting in March.

What all of this means is that if you purchase a ticket for an NFL football game at any time during the next 7 years, you will be financially supporting George Soros-backed leftist political advocacy groups.

One Comment on “Shocking: NFL Owners Cave in to Player Protests, Will Pay Millions to George Soros-backed Social Justice Groups”