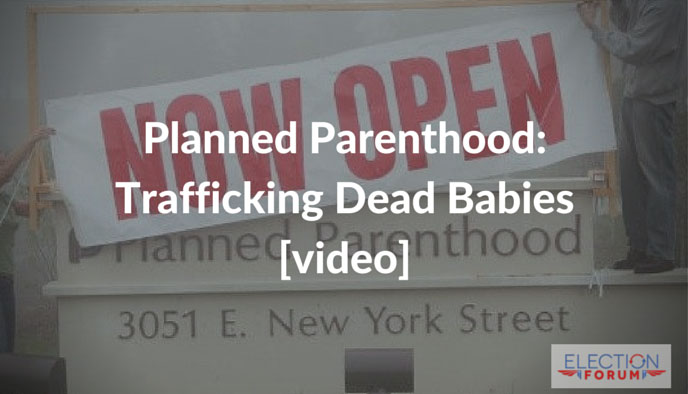 This is an organization that exists to kill babies. It is an abortion mill.

A few years back, I used this term – “abortion mill” – and got slandered by the TV and liberal media. When I ran for office, Planned Parenthood spent over $500,000 to defeat me… because I spoke the truth.

And now we find that Planned Parenthood has taken its slaughter to a new level of evil – selling the intact organs of aborted human babies to the highest bidder. They are an organization that thrives from killing innocent and voiceless human victims and then trafficking their remains for research.

The money it receives for these infants’ body parts is blood money.

The public is morally outraged by this discovery.

The videos that the pro-life Center for Medical Progress (CMP) has released – where CMP posed as buyers of fetal organs during lunch with top Planned Parenthood executives – have gone viral.

Over their lunch, Dr. Deborah Nucatola – Planned Parenthood’s Senior Director of Medical Services – detailed the business of selling the organs of aborted babies, including the exact techniques used to kill the baby so that the organs remain intact and useful.

Dr. Gatter said “we’re not in it for the money,” but still the payment “has to be big enough that it’s worthwhile for me.” She settled on a tentative $100 per organ – with the possibility of increasing the price depending on the market. She laughingly added, “I want a Lamborghini.”

Planned Parenthood has issued weak cover-ups for these scandalous discoveries:

First of all, it’s not just tissue – it’s viable ORGANS of small, but fully formed human     babies that we’re talking about.

Yet, given the opportunity to sell this “tissue,” they carefully ensure that the abortion will keep it intact – knowing FULL WELL that it is not tissue but viable, human baby organs that they are harvesting.

Second, they are NOT donating – Dr. Nucatola gave a price range for the organs; Dr. Gatter said that the compensation should be “enough to make it worthwhile for her.”

Let’s estimate how much Planned Parenthood could make off selling these organs. It reports that it performs 327,653 abortions a year. Given Dr. Nucatola’s price range for babies’ organs ($30-$100), and Dr. Gatter’s estimation that 60% to 70% of mothers would agree to have their babies’ body parts “donated,” Planned Parenthood could be making anywhere between $5.8 and $22 million annually from selling aborted babies’ organs.

(2) Planned Parenthood states that “anti-abortion” advocates are again “making claims with no basis in reality and no evidence to back them up,” and the tape was “heavily edited”.

A two hour and 42 minute video, and a second video just released – each with a top executive of Planned Parenthood – is strong evidence that cannot be ignored.

Also, CMP has released the full recording and transcript. And, no matter what cuts CMP made to present a shorter version, they did not put those heinous words into Dr. Nucatola or Dr. Gatter’s mouths.

But this isn’t the first video to expose Planned Parenthood’s dark, evil, underhanded dealings. Any organization that commits such evil must abound with deception and lies.

Selling fetal organs for profit is illegal under federal law. Planned Parenthood insists that they do not make a profit but are only compensated for actual costs associated with the “donations.”

Congress has called for an investigation into this matter. It is also possible that Planned Parenthood is guilty of performing illegal partial-birth abortions, since this would make it much easier to get intact organs.

But, legally, they may untouchable.

The big objective, which almost all Republican presidential candidates are calling for, is to defund Planned Parenthood. We must stop the half a billion taxpayer dollars given annually to support this abortion mill.

Now, Planned Parenthood has dehumanized the unborn baby even further. Harvesting aborted infants’ body parts is a horror like that of the Holocaust’s concentration camps, where the Nazis saved the Jews’ shoes, hair, even pulled out their gold teeth, before sending them to the gas chambers – valuing these objects more than the human beings that they belonged to.

By selling aborted babies’ organs, Planned Parenthood is saying that a dead baby’s parts are worth more than the baby is alive.

Here’s a video on the scandal, here. And another, here.