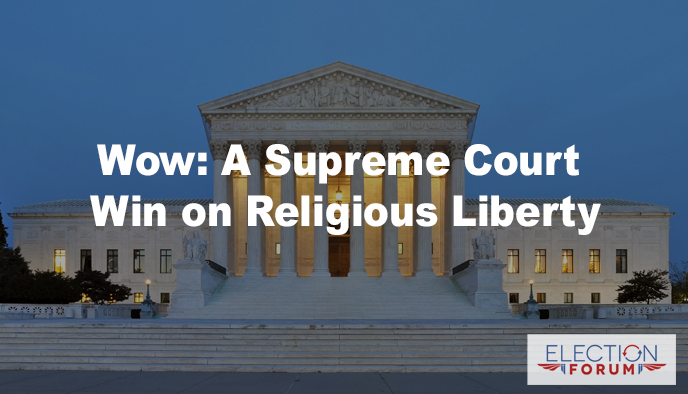 It’s a stunning win for Christians across America.

What originally started as a simple request to resurface a playground has sent shockwaves throughout the country.

In this landmark decision, the biggest religious freedom case of the year, a 7-2 majority ruled the state cannot restrict a program of distributing recycled tire parts for playground surfaces from a church simply because it is a church.

Trinity Lutheran Church did not seek any special benefits from Missouri. It sought only to be included on an equal basis in a state program available to all.

The Supreme Court rejected the arguments of liberals and Democrats like Vermont Sen. Bernie Sanders, who think Christians should be excluded from any job or partnership with government.

It’s the kind of decision many evangelicals prayed for when justice Neil Gorsuch was picked for the nation’s highest court.

Worried the case would end in a tie, the court waited to hear the case once Gorsuch was on the bench.

Old tire parts? Why does this case matter?

It matters because the Supreme Court recognizes the difference between a government establishing a religion and a government choosing not to penalize a religion.

There are several reasons we should be careful of “state-established religion”:

But this case is not about a state establishing a religion.

Missouri wasn’t contemplating privileging Lutherans for this program, with a “consubstantiation clause.”

Rather, the state offered a neutral program for groups – public or private – that cared for children and owned a playground.

The law shut out Trinity Lutheran not because they didn’t meet the criteria for the program but simply because they are religious.

Justice John Roberts noted in his opinion: It is true the “(Missouri Department of Natural Resources) has not criminalized the way Trinity Lutheran worships or told the church it cannot subscribe to a certain view of the gospel. But, as the department itself acknowledges, the free exercise clause protects against ‘indirect coercion or penalties on the free exercise of religion, not just outright prohibitions’.”

No reasonable person would conclude that giving excess tire fragments to a church or a synagogue or a mosque would constitute government recognition of that house of worship or its beliefs.

Instead, the state has an interest in making sure children are safe, and want to get the playground surfaces to where the children are.

Monday’s court decision is huge, in that it holds important implications for future religious liberty.

The court held that Missouri engaged in religious discrimination.

Every year, the pressures mount in American life to make a distinction between church and state, and to use government to secularize our civic spaces.

This is not what the First Amendment intended.

Yes, we need to honor the mandate that to “make no law respecting the establishment of religion,” but we must balance that with our right to the free exercise of our religious consciences and to protect religious people and organizations from being unfairly targeted for official disfavor.

The ruling limits the power of the state, and all Americans should celebrate that.

It’s a strong win for equal participation of religion, and free religious choice, in government benefits. This opens the door for:

The Missouri Department of Natural Resources said no, because Trinity was a “religious institution.”

“The consequence is, in all likelihood, a few extra scraped knees. But the exclusion of Trinity Lutheran from a public benefit for which it is otherwise qualified, solely because it is a church, is odious to our Constitution all the same, and cannot stand.”

Certainly, the framers of the Constitution never meant to exclude churches from public life.

With this ruling, perhaps America is getting back on the right track.

What do you think? Email me at craig@electionforum.org with your take on this ruling.

Read the Supreme Court transcript on the Trinity case here

One Comment on “Wow: A Supreme Court Win on Religious Liberty”