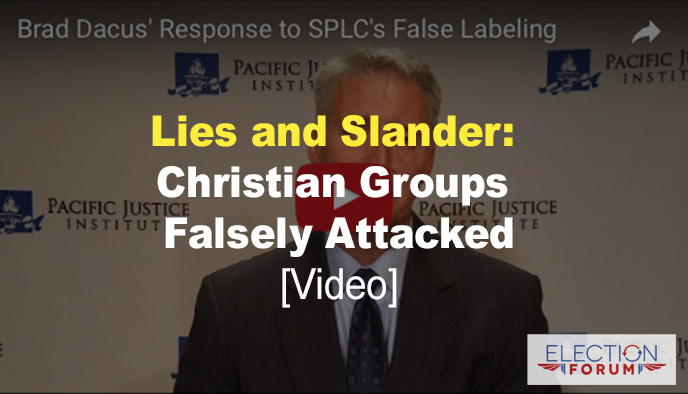 Christian groups that believe in a Bible worldview are now being slandered with lies and falsehoods.

Now they are doing it to the Pacific Justice Institute.

Because the progressive media, which hates, distorts and likes nothing better than to bash Christians and conservatives, and their causes, are wrongly using the radical progressive Southern Poverty Law Center’s phony “hate group” list as a legitimate source.

Here’s how it works.

If you speak out against a progressive agenda, you are considered a “hate” group.

If you’re pro-life, promote biblical values, including traditional marriage, you get on the SPCL “hate” list.

If you’re the Christian legal aid group, Alliance Defending Freedom, you get on their “hate” list.

Meanwhile the SPLC is a “hate group” itself, hating any group that doesn’t abide by its anti-biblical ideology.

The SPLC has made hate a growth industry, amassing millions of dollars by fundraising against “hate.”

Its most recent financial coup is a $1 million donation from Apple and another $1 million from George and Amal Clooney.

Did you know the SPLC has a bank account in the Cayman Islands?

Which begs the question, why does a tax-exempt group need such an account?

The SPLC isn’t required by the IRS to disclose details about its foreign account. Just know they claim to be worth $319 million.

They also spend twice as much on fundraising than they do on legal services for victims of legitimate civil rights abuses.

And when it comes to accountability and ethics in fundraising, the SPLC is rated “poor” by Charity Navigator.

Its founder, Morris Dees, has been labeled a “millionaire huckster,” by none other than the far-left Nation magazine.

Even the FBI deleted the SPLC from its website’s list of legitimate resources on hate crimes.

The Southern Poverty Law Center has devolved from an organization that once combatted real hate groups such as the KKK, to attacking people like Ben Carson, Attorney General Jeff Sessions, and conservative author/speaker Dinesh D’Souza or legitimate groups like the Pacific Justice Institute.

The Pacific Justice Institute (PJI) defends religious liberty, parental rights and other civil freedoms. It’s one of the most effective defenders and advocates of religious liberty. It defends Christians, churches and groups against hate and attacks on Constitutional rights.

That means a group that defends religious liberties like the PJI is right up there with the KKK, Neo-Nazis and white nationalists.

It has prompted the D. James Kennedy Ministries to file a lawsuit against SPLC, alleging it is “willfully deceitful” and for “false information that libels the ministry’s reputation.”

The FRC says its mission is to advance faith, family and freedom in public policy and the culture from a Christian worldview.

This labeling not only hurts a group and its leader’s reputation. It also can spark crazy violence.

A liberal activist who shot up Perkins’ FRC offices told the FBI he picked his target from the SPLC’s website.

The Pacific Justice Institute is demanding apologies and retractions from television and newspaper media outlets after being listed alongside extremist white supremacist groups linked to recent violence in Charlottesville, Va.

According to PJI President and founder Brad Dacus, no reporters reached out to PJI to verify their stories.

“The SPLC’s false accusation that PJI is a hate group is calculated to provoke contempt and potential violence against PJI.  PJI has never promoted or engaged in acts of violence against any person or group.  The work of PJI includes the defense of victims of intolerance against individuals and institutions because of their faith.  The case files of PJI’s attorneys include the representation of immigrants fleeing religious persecution from Asia and the Middle East.

“During the last year lawyers for the organization have fought hospitals and government officials—in court—to prevent the removal of life-support from two children of African-American descent and a construction worker who is a Mexican immigrant.  SPLC’s attempts to associate PJI with violent racist hate groups is incendiary and dangerous.”

Dacus went on to point out:

“It is unacceptable and inexcusable to compare the First Amendment work of a legitimate religious freedom defense group to abhorrent White Supremacists and Neo-Nazis.  PJI believes in mutual respect and tolerance.  We have absolutely nothing in common with hate groups working to spread discord and violence, as has recently manifested in Charlottesville.”

“The SPLC is an extremist organization that creates vitriol and division instead of tolerance, dialogue, and understanding by attacking non-profit organizations like PJI for helping to defend those who cannot defend themselves.  Further, in recent years, SPLC has created an enemies list which include nonviolent and law-abiding individuals and organizations who, as a matter of conscience, simply promote biblical values on sexual ethics.

The media needs to stop undermining its credibility by quoting discredited, corrupt, biased groups like SPLC.

Its sources should be credible, not taken as fact.

Brad Dacus takes on the SPLC’s false labeling in this powerful 3-minute video: