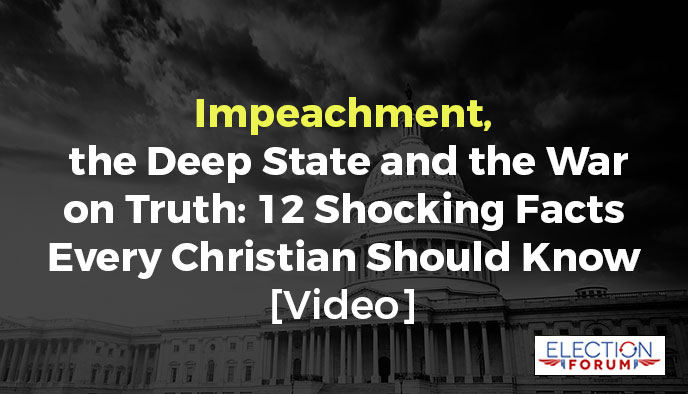 These words are what the impeachment hearings being conducted by the congressional Democrats and the biased media are all about … along with 3 years of Deep State sabotage against the president … and against Vice President Mike Pence.

Here are 12 shocking facts you should know … and that the media isn’t reporting:

An anonymous CIA Deep State operative/bureaucrat – with an identified and admitted anti-Trump bias – filed a complaint about a presidential phone call to the newly-elected president of Ukraine.

He wasn’t on the call, so all the information in his complaint was second-hand or third-hand.

The identity of the so-called “whistleblower” – and everyone he worked with at the CIA – is being hidden.

2. The purpose of President Trump’s phone call was to congratulate the new Ukrainian president on his election victory.

It wasn’t an “inappropriate” phone call at all. And the transcript of the call has shown that the whistleblower allegations are false.

The allegations in the complaint have even been denied by the President of Ukraine.

3. Here is what you need to know about impeachment.

Impeachment is a 3-step process outlined in Article II, section 4 of the Constitution. There are 3 constitutional grounds on which impeachment proceedings may begin:

Once it has been determined that impeachment is necessary, here’s what happens:

4. The “whistleblower is a part of a coordinated, purposeful attack on President Trump.

Two months before the alleged “inappropriate” phone call with the Ukrainian president, President Trump was talking about working with Ukraine on a collusion investigation.

Attorney General William Barr and U.S. Attorney John Durham are investigating how the Russia collusion hoax began in 2016. This investigation terrifies those who were involved in it.

5. The impeachment inquiry will not go anywhere.

The entire impeachment inquiry is a sham….

The circus will end in December … before the 2020 primary election season begins early next year.

They are paralyzed by hatred for President Trump.

6. This impeachment fiasco will undermine the trust of any government official in talking to the president.

Presidential phone conversations with foreign leaders are by definition classified and should not be leaked or otherwise revealed to the general public.

But after this, government leaders are going to be hesitant to talk honestly with U.S. presidents for fear that their conversations will be made public.

7. The CIA/FBI and Deep State bureaucrats must be fired and punished.

They should be held accountable for their illegal and unethical actions.

So far, none have been punished … and some have signed lucrative book deals – and/or have been hired by progressive media outlets as news analysts and contributors.

8. The Deep State wants President Trump removed from office in any way possible.

9. How the Deep State bureaucrats have tried to nullify the 2016 election.

10. Why Donald Trump is hated so much.

11. What about Joe Biden and the Ukraine.

There is no doubt that there are unanswered questions about Joe Biden’s and his son Hunter Biden’s involvement in Burisma – a Ukrainian gas company.

It’s not inappropriate for a U.S. President to question a newly-elected Ukrainian president about his intentions to conduct an investigation into possible corruption involving U.S. persons and a Ukrainian business.

What most people don’t know – and what the progressive media refuses to report – is that the U.S. has a treaty with Ukraine specifically regarding mutual cooperation in international investigations.

The treaty was signed – quite ironically – by former President Bill Clinton.

12. What the socialist/progressives hope to accomplish.

Their overall goal is to confuse voters and demoralize any Trump supporters … and convince millennials and undecided voters that President Trump can’t win in 2020 … and shouldn’t win.

You can learn more about the goals, strategies and tactics of the Deep State in my book, The Deep State: 15 Surprising Dangers You Should Know.

2 Comments on “Impeachment, the Deep State and the War on Truth: 12 Shocking Facts Every Christian Should Know [Video]”