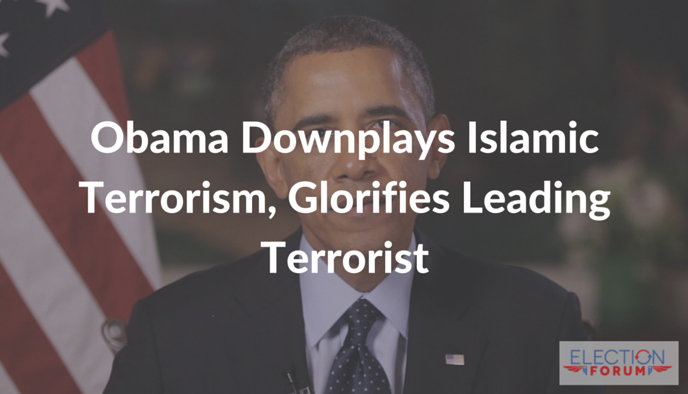 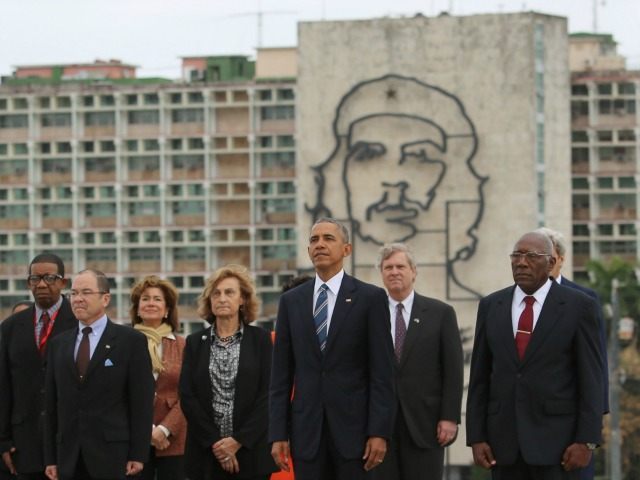 During President Obama’s trip to Cuba (the first visit from American president in 90 years), President Obama went to visit the moment of Cuban national hero Jose Marti. Then he was photographed with a giant mural of terrorist communist Ernesto “Che” Guevara right behind him.

An outline silhouette of Ernesto “Che” Guevara looked down on the President.

Here’s a little history about Che:

“A revolutionary must become a cold killing machine motivated by pure hate.”

In Cuba, he forced men and women into slave labor camps. Combined with the number of people he personally killed, around 14,000 died at Che’s hands.

He held a deep disdain of religion in general:

“In fact, if Christ himself stood in my way, I, like Nietzsche, would not hesitate to squish him like a worm.”

Che also persecuted the Catholic Church, Jehovah’s Witnesses, and even African-style cults. During the Castro invasion of Cuba, priests were deported or fled the country, and some religious officials attempted to take back the country in the Bay of Pigs fiasco.

“We’re going to do for blacks exactly what blacks did for the revolution. By which I mean: nothing.”

“The black is indolent and a dreamer; spending his meager wage on frivolity or drink; the European has a tradition of work and saving, which has pursued him as far as this corner of America and drives him to advance himself, even independently of his own individual aspirations.”

And now the world is witnessing the American President, who is supposed to represent the land of the free and the home of the brave, standing underneath it, paying allegiance. Not only that, but during his trip, the Islamic horrific terrorist attacks in Brussels rocked the world. Within hours of the horror, President Obama denounced the “terrorism, but refused to connect radical Islam to those barbaric actions.

In 51 seconds, the President barely mentioned the terror at the Brussels airport and subways. No trip back to the U.S. to meet. Not trip to Europe to show support. Not intervention against ISIS. And our President acts as if nothing happened. In those 51 seconds, he never identifies the cause or a solution to Islamic Extremism. Instead, he praised for over an hour the terrorists in Cuba—the Castro Brothers and the repressive Communist regime.

Once again, Islamic terrorism has shut down airports and changing the way Europeans live. President Obama went to a baseball game, and made light of or ignored these attacks.