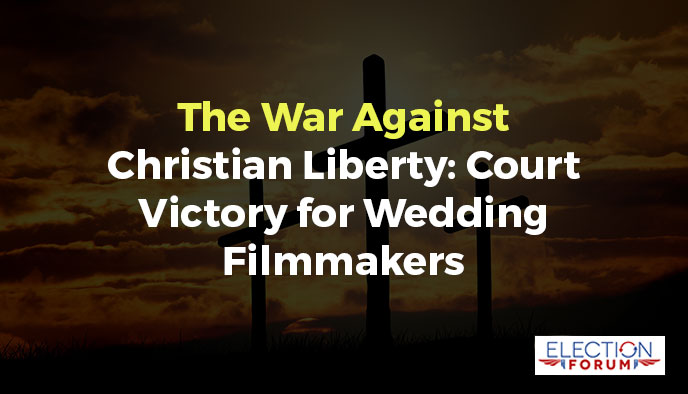 It’s only a temporary victory…

But it’s a victory nonetheless.

Because they believe in the biblical concept of marriage – that it’s only between one man and one woman – they cannot create a positive video depiction of a same-sex wedding without violating their consciences and their core religious beliefs.

But the Minnesota Human Rights Act (MHRA) – which prohibits discrimination based on sexual orientation – requires the Larsens to depict same-sex and opposite-sex weddings in an equally “positive light.”

The Larsens sued the Minnesota Human Rights Commissioner in 2016, requesting the right to refuse to film same-sex weddings on free-speech and free-exercise-of-religion grounds. They said violating the MHRA would result in steep fines and jail time if they offered their filmmaking services only to heterosexual couples.

A federal judge dismissed the case 2 years ago, rejecting the Larsens’ free-speech and free-exercise-of-religion claims…

But a 3-judge panel of the 8th U.S. Circuit Court of Appeals overturned the dismissal by the federal court … sending the case back to the lower court with instructions to consider the Larsens’ request for a preliminary injunction to block enforcement of the MHRA.

Eighth Circuit judge David Stras wrote in the 2-1 majority opinion, “Minnesota’s interpretation of the MHRA interferes with the Larsens’ speech in two overlapping ways. First, it compels the Larsens to speak favorably about same-sex marriage if they choose to speak favorable about opposite-sex marriage. Second, it operates as a content-based regulation of their speech. The Larsens’ videos are a form of speech that is entitled to First Amendment protection.”

The Larsens’ case is not completely resolved … it is ongoing.

What needs to change is the Minnesota Human Rights Act – and similar acts in other states and cities – which provide no First Amendment protections for faith-based businesses that cannot celebrate or promote same-sex marriage.

Please pray that state laws discriminating against Christians and a biblical world view will be altered to include free-speech and free-exercise-of-religion exemptions.

2 Comments on “The War Against Christian Liberty: Court Victory for Wedding Filmmakers”