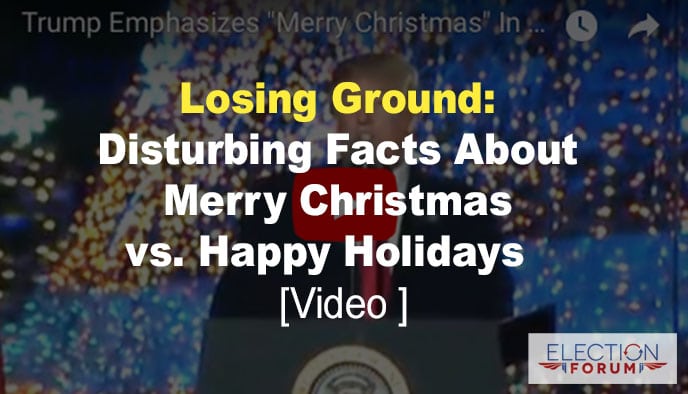 In a new survey conducted by the Pew Research Center, over half of Americans (52%) say it doesn’t matter whether companies and organizations say, “Merry Christmas” or “Happy Holidays.” That’s up from 45% in 2005.

Why even talk about this? Does it really matter?

Shouldn’t Christians be tolerant and accepting of all faiths…or no faith? After all, two-thirds of evangelicals (67%) say the non-religious “Happy Holidays” greeting is fine, while only 20% say it’s inappropriate.

Here’s what two-thirds of evangelical Christians are overlooking:

Christmas is a religious holiday… specifically, a Christian holiday. Without Christ, there would be no Christmas.

President Trump, without apology, is bringing Christ back into the national consciousness and vocabulary. He is saying that it’s not only “okay,” but it’s proper to say, “Merry Christmas.”

As Christians, we should have the same attitude.

Listen to President Trump’s 5-and-a-half-minute speech during the national Christmas tree lighting ceremony in Washington, DC. Particularly, listen to what he says beginning at the 2:10 mark.