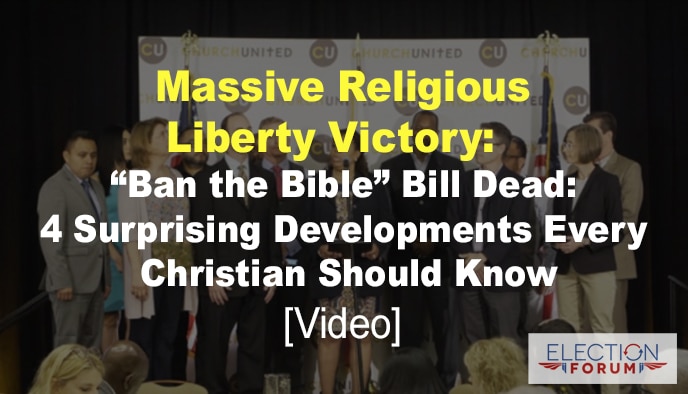 Quite frankly, politicians, media and Christian leaders across the nation are stunned…

All eyes have been watching the progress of AB 2943 – the so-called “Ban the Bible” legislation created by the California state legislature to be a model for the nation.

The LGBT caucus-sponsored bill successfully passed the leadership in the California Assembly and state Senate.

It needed a final Assembly vote before being sent to Governor Brown for his signature.

Progressives and conservatives, pros and cons, all believed it would pass.

It was withdrawn by the author of the bill on the last day of the legislative session before the fall recess.

Here are the 4 things you should know.

It would have opened the door to fines and lawsuits against those who believe in Biblical marriage. It would have banned paid counseling or the sale of material dealing with sexual orientation or gender confusion – labeling these activities as fraudulent business practices. This could have included Christian books, including the Bible.

It was intolerant, forcing Christians not to charge a fee for teaching Biblical truths …  and discriminating against people freely seeking help.

Despite hearing the testimonies – during the legislative hearings on AB 2943 – of many people who have been set free from unwanted same-sex attraction, the advocates of the bill rejected those testimonies and insisted that sexual orientation change efforts are ineffective – and in effect, fraudulent.

Assemblyman Evan Low – member of the LGBTQIA legislative caucus and author of AB 2943 – mysteriously and surprisingly withdrew the bill from a vote on the last day of the legislative session.

He says it was because he talked to religious leaders.

If that’s the real reason, great.

But here’s what actually happened:

I’m reminded of the passage in 2 Corinthians 5:14-21 … which begins with the words “For the love of Christ controls us…” and includes the verse, “Therefore if anyone is in Christ, he is a new creation; the old things passed away; behold, new things have come.”

Watch this video of the powerful testimonies of former gays and lesbians transformed by the love of Christ (11 minutes): https://vimeo.com/268873541

Thank you to all who signed our petition – well over 15,000. It was short of our goal, but it was a powerful force.

Your efforts put fear and concern into the political elite. I encourage everyone with love and grace to thank Evan Low for abandoning AB2943 and protecting religious liberty.

I believe this is just a taste of not just the church awakening, but revival coming.

Wouldn’t it be great for revival start in California … and spread nationwide?