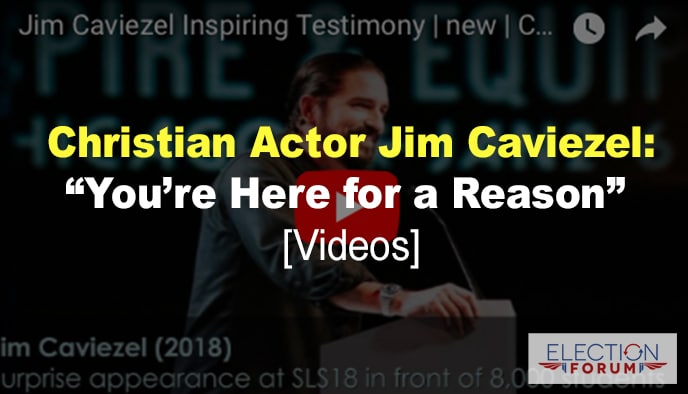 Jim Caviezel – the actor who portrayed Jesus in the 2004 blockbuster film “The Passion of the Christ” – is an outspoken evangelical Christian.

A rarity in Hollywood…

Cavievel told the students that God has a calling on each of their lives: “You’re going to be given a power and an opportunity. You’re here for a reason.”

He also said, “The world is going to look to you for hope, and you’re going to suffer for it.”

Caviezel shares in his personal testimony that he felt called by God to be an actor at the age of 19 while sitting in a movie theater.

He had felt no previous desire to become an actor … he had no agent, no contacts in the film business, no knowledge of what to do or where to start.

During the filming of “The Passion of the Christ,” Caviezel was stuck on his bare back by the “cat-o-nine-tails” whip during the scourging scene … his shoulder was dislocated while he was carrying the cross … and he was struck by lightening while on the cross.

He portrays Luke in the new film “Paul, Apostle of Christ” – which opens in theaters on March 23rd.

Caviezel made a surprise appearance at a Student Leadership Summit (SLS18) in Chicago and delivered an inspiring 14-minute talk to 8,000 students. Watch it here:

Also watch the official trailer for the movie “Paul, Apostle of Christ”: