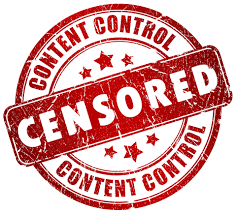 The war on free speech.

The war on competitive ideas.

The war against conservatives, libertarians and Christians has escalated.

Using the violence at the Capitol as a pretext, Twitter, Google and Facebook shut down all of former President Trump’s comments and activities.

They also shut down thousands…and a growing number…of organizations, individual opinions and even elected politicians that hold to a conservative, libertarian, or Christian point of view.

We have discussed in the past how Facebook and Twitter have censored or diminished our ability to communicate to the public.

And how Google and YouTube searches prevent you from seeing all sides, giving you instead only the pro-socialist-approved search results.

Now they have taken it to a higher level in a coordinated, systematic attack: blatant censorship.

My speculation is that this attack is coordinated probably by an organized effort of liberal groups who are seizing and using their legal teams and trained activists to do what they do best: put pressure on companies and organizations to act in coordination…because this is a very coordinated attack.

I have been recommending that people use Parler versus Twitter as an alternative.

President Trump, many conservatives and libertarians, many Republicans, many Christian individuals, organizations, and churches have been using or moving to Parler.

But it was shut down by Amazon with an unprecedented coordination with Google and Apple that makes it impossible to get Parler.

It’s killing not just competition, but alternative voices that differ from socialism and secularism.

This coordinated attack by tech giants is successful.

Parler has found that its email, its lawyers and its vendors have also been contacted. Out of fear, they withdrew their support and refused to provide them services.

It’s a necessity to break the oppressive monopoly.

That law, with the current mixture of Congress, is not able to be changed.

The most important thing to communicate now is not on social media, but by email.

And as readers know, Reality Alert has been discovering that ISPs have been participating in censorship by not allowing people to click on our links.

And some of the email providers are starting censorship as well.

Make sure that you put Reality Alert on your whitelist.

If you don’t put us on your whitelist, it’s likely that you will never read what we have to say as it will be censored.