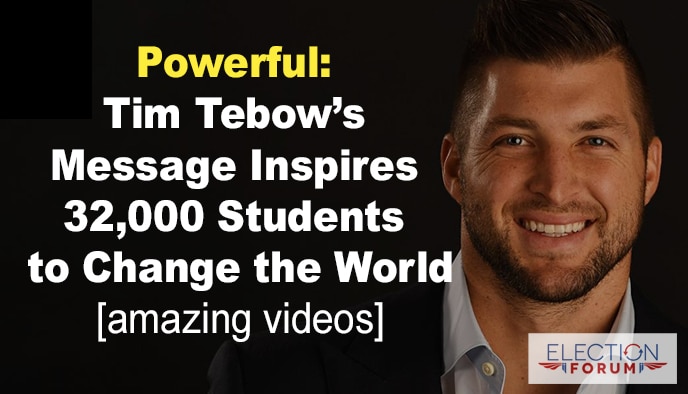 It took place during this year’s “Passion Conference” with an awesome lineup of speakers.

Tim Tebow shared parts of his personal testimony during a sit-down interview on stage, and talked about how important it is to give a 100% effort in everything we do.

He said that as Christians, we witness every day … and that occasionally we use words…

But people won’t listen to what we have to say unless they see something different in our external behavior and lifestyle.

Passion Conferences is a Christian organization founded in 1997 by Louie Giglio, pastor of Passion City Church in Atlanta.

During the conference, students were encouraged to refuse to stand by and do nothing … they were given the opportunity to contribute to 3 causes…

Here’s what they did in 3 days:

Here is a 3 ½-minute video summary of the Passion 2018 conference:

You can access all of the amazing talks given by the speakers at Passion 2018 here:

Here are just a couple of the highlights from Tebow’s story:

Listen to Tim Tebow’s interview with Louie Giglio at the link below. It’s 27 ½ minutes long – the first few minutes are small talk about college football and Tim Tebow’s football resume…the meat of Tebow’s inspiring message begins at the 7:22 mark:

Beginning at the 15:00 mark of the interview, Tebow describes the amazing things that happened exactly 3 years after that national championship college football game … when he put “John 3:16” under his eyes before the NFL playoff game between the Denver Broncos and the Pittsburg Steelers. Listen to find out…