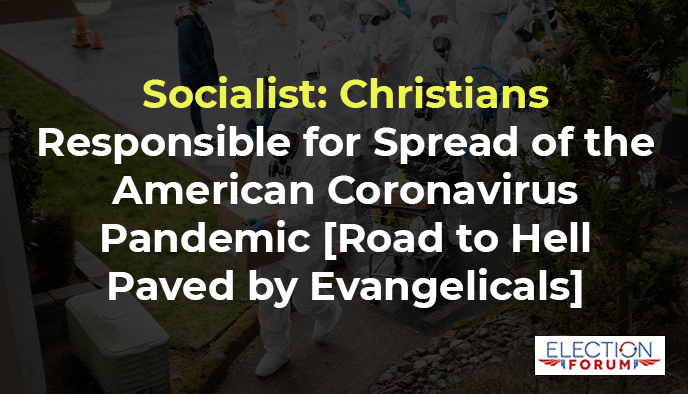 Did Christians fuel the COVID-19 pandemic in America?

According to a New York Times op-ed, “The Road to Coronavirus Hell was Paved by Evangelicals,” they did.

Because Trump surrounds himself with evangelicals and their “anti-science” attitudes.

According to the article, “Donald Trump rose to power with the determined assistance of a moment that denies science, bashes government and prioritized loyalty over professional expertise. In the current crisis, we are all reaping what that movement has sown… This denial of science and critical thinking among religious ultraconservatives now haunts the America response to the coronavirus crisis.”

Who were the Christians directly responsible for the pandemic? Singled out were:

And associated evangelical Christians with some fringe beliefs for example:

Part of the op-ed attack was based on President Trump saying he wanted to have people get back to work by “Easter.”

According to the op-ed author, this was religious speak. He could have said, by “mid-April” instead of purposely saying the word “Easter.”

Why the reference to Easter? The author’s presumption that it was to please the evangelicals with the vision of packed churches at Easter.

This is hate-mongering, not intelligent disagreement over politics or religion.

You can disagree with Christians. But to blame them for the Coronavirus and not blame the real source – China – is sad and wrong.

In this verse Jesus said, “You will be hated by everyone because of Me, but the one who stands firm to the end will be saved.”

5 Comments on “Socialist: Christians Responsible for Spread of the American Coronavirus Pandemic [Road to Hell Paved by Evangelicals]”