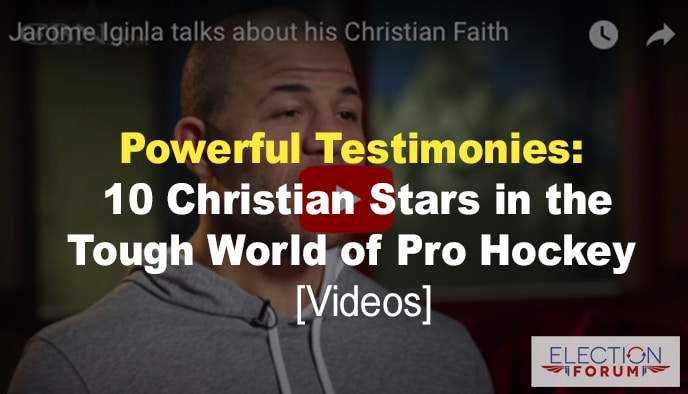 Of all the major sports, it is particularly hard to be a vocal Christian in the National Hockey League because:

Standing up for Christ takes a strong man of God and is no place for wimps.

While it has gotten a lot easier for a Christian hockey player to talk about his faith, the “Christian isn’t tough” stigma continues.

No teammate wants a player to “turn the other cheek” when a fight breaks out.

Former Los Angeles Kings coach Barry Melrose analyzed this conundrum by noting, “A lot of people in hockey feel you can’t be a big, tough, physical player and be a Christian, but just the opposite is true. They are some of the most fierce competitors in the world.”

To really know Jesus is to “run the race to win the prize,” as the Apostle Paul so eloquently put it.

To really have a personal relationship with Jesus means competing at the top of your game to give God all the glory.

Christianity has come a long way in the once hush-hush world of hockey. Today there is a Hockey Ministries International that spreads the word of Jesus Christ.

Here are 10 National Hockey League players who credit Jesus for their success and goals in life.

Jarome Iginla: He made his mark with the Calgary Flames before ending his great career with the Los Angeles Kings (technically he is an unsigned free agent). A tough scorer and a tougher player, Iginla says “I pray daily and believe in God and do the work. When I go on the ice, I do the best I can. I believe Jesus died for us and that He is there for us.” Iginla’s father was a Muslim who converted to Christianity. His mother is a Buddhist. Jarome loves Christ and believes “God has a plan. I never thought of leaving a legacy. I try to be joyful. I lean on Jesus.”

Listen to Jarome Iginla talk about his faith in Christ in this short video.

Laurie Boschman blazed a trail for Christians in the NHL when “religious” players were frowned upon. A top draft pick for the Toronto Maple Leafs, he was introduced to Jesus by teammate Ron Ellis. After receiving Christ in his life, he said “just don’t tell the other players, OK?”

After a bad game, the owner of the Maple Leafs, Harold Ballard, blamed his “soft play” on his Christianity, telling him he had too much religion. When he lost his wife to cancer, he credits his faith in Christ for seeing through. Today, Boschman is the coordinator for all the team chaplains in the NHL.

Peter Budaj, who took over for injured L.A. Kings superstar goaltender Jonathan Quick for an entire season, has a strong faith in Jesus. He says, “this is the most important thing, this life is temporary. One day we as a people will die. I believe I will go to heaven because I believe in Jesus Christ as my Lord and Savior. I’ve done a lot of wrong things in life I am not proud of, and that’s why I need Jesus. He came to save the unrighteous, not the righteous.” He has Joshua 1:9 printed on the back of his helmet.

Stu Grimson, one of the NHL’s most feared enforcers for the Chicago Blackhawks and referred to as the Grim Reaper, is remembered for his two seasons with the Anaheim Ducks and one with the L.A. Kings. He became a born-again Christian in the early 1990s and led the NHL’s Christian Fellowship, telling one interviewer, “Jesus is no wimp.”

Watch this insightful 3-minute video on Stu Grimson on the code of fighting and being a Christian.

Adam McQuaid. The Boston Bruins defenseman has grown more bold and outspoken about his faith in God and the role it plays in his life. It was during the battles with various injuries that McQuaid sustained that his faith in God strengthened. He said, “I’ve played hockey all my life. But I know that when I’m done playing, I’ll have that relationship with Jesus for the rest of my life and the rest of eternity, and it’s something that will continue to grow.”

Shane Doan: The retired Phoenix Coyotes great was always a thorn in the side of the L.A. Kings. He says Romans 8:28, is so special to him he writes it on his hockey sticks: “And we know that in all things God works for the good of those who love Him, who have been called according to His purpose.”

Mike Fisher retired after successful stints with the Ottawa Senators and Nashville Predators. As a young hockey player, he struggled with all the sins of the world. He entered the NHL at 19 fulfilling a childhood dream, but was unhappy inside. He knew he was letting God down, he said. Until he took to heart Matthew 10:39: “If you give up your life for Me you will find true life” to heart.

Fisher makes Jesus a priority, talking about his walk with the Lord in his biography, “Defender of Faith.” He continues to be a spokesperson for the Christian community, along with his wife, country singer Carrie Underwood.

Watch Mike Fisher talk about his walk with Jesus in this 7-minute video.

Bernie “Boom Boom” Geoffrion, winner of 6 Stanley Cups with the Montreal Canadians and credited with inventing the slap shot, wrote these words at the end of his autobiography: “Once upon a time I used to believe hockey was everything. It isn’t. God and family come first. Being happy with the Lord and my family is a lot better than winning 500 Stanley Cups! When you are flat on your back the only place to look is up — to God. These words come to mind: ‘What does it profit a man to gain the whole world and suffer the loss of his soul?”

Mike Gartner, who played right wing with the Washington Capitals, is a member of the 700-goal club. He was led to Jesus by Jean Pronovost, one of the game’s outstanding wingers who ended his career with the Capitals. He was led to Christ by then Atlanta Flames defenseman Ed Kea and his wife, who invited him to Bible studies at his home. In the book, “Toward the Goal,” Gartner says he got on his knees in a hotel room and prayed, “Lord if You are real, come into my life now and change me. … I found a peace that profoundly impacted the rest of my life.”

Gartner says he played to glorify God, that he felt responsible to God to use the talents and abilities He had given him.

Dan Ellis, one-time goaltender with the Nashville Predators and the Washington Capitals, learned about Jesus at a Christian hockey camp. His dad sent him to one when he saw his son was headed for trouble. As he grew older, he said he realized that the more he studied the Bible, the more he realized following Jesus was the only way. He calls God his anchor. “He is the only constant in the ups and downs of life.”

Watch this powerful 5-minute video of goaltender Dan Ellis being saved by grace.

Read more about these great men of God in hockey on the Hockey Ministries International website.

Then have a heart for God and run after Him so that you, too, as Eric Liddell so wonderfully put it, “feel His pleasure.”

“Every athlete exercises self-control in all things. They do it to receive a perishable wreath (crown), but we an imperishable. So I do not run aimlessly; I do not box as one beating the air.” Paul, 1 Corinthians 9:25-26

IN CASE YOU MISSED OUR OTHER ARTICLES ON CHRISTIAN ATHLETES:

In Part 2, we introduced readers to many Christian baseball players who aren’t afraid to walk the talk. CLICK HERE to read the story in case you missed it.

In Part 3, we put the spotlight on 25 current and retired members of the National Football League who stand their ground for Christ. CLICK HERE to read Part 3 in case you missed it.

In Part 4, we listed 10 NBA athletes who preach Jesus Christ. CLICK HERE to read Part 4 in case you missed it.

One Comment on “Powerful Testimonies: 10 Christian Stars in the Tough World of Pro Hockey [Videos]”