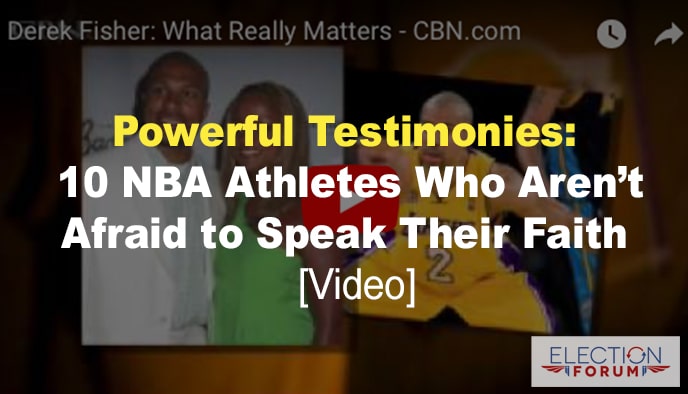 Often, a star athlete makes the news when implicated in a killing, shooting, DUI or spousal abuse.

And these are supposed to be our role models?

It’s always a joy to single out athletes, our role models, as strong men and women of faith.

This week, let’s look at 10 NBA athletes who don’t just talk the talk, but walk the walk and evangelize the Gospel of Christ in their everyday lives.

They put God No. 1 in their lives, and they let you know it.

1. Stephen Curry: The Golden State Warriors superstar and two-time MVP point guard is an outspoken Christian who wears Scripture on his playing shoes that say, “I can do all things,” referring to Philippians 4:13 (“I can do all things through Christ who strengthens me.”).

“Each game is an opportunity to be on a great stage and be a witness for Christ. When I step on the floor, people should know who I represent, who I believe in,” he said.

Curry wrote that he loves to point people toward “the Man who died for our sins on the cross. I know I have a place in Heaven waiting for me because of Him, and that’s something no earthly prize or trophy could ever top.”

It is normal for the Warriors to have a 30-minute Bible study every game day that includes most of the team.

I love it when Curry says, “There’s more to me than just this jersey I wear, and that’s Christ living inside of me.”

That is powerful testimony.

2. Lebron James: You can debate how “strong” a Christian the best player in basketball is, but you have to take notice when the Cleveland Cavaliers all-time everything leader says in a taped post-game interview that “You can’t bank on anyone … only one guy in the world where everything will be alright when He comes back, and that’s Jesus Christ.”

3. Derek Fisher:The former Los Angeles Lakers star guard and five-time NBA champion is quoted as saying, “I just totally put everything on my faith in God. If I concentrate on something and work hard at it, something good will come out of it.”

In an interview with the 700 Club, Fisher says, “God blessed me with an ability to play this game very well.  So then, in response to that, to show Him that I appreciate that blessing, I’m supposed to try to be the best at playing the game of basketball. I know all of it is because of Him. There’s no question about it. The source of my power and strength is God, and I know it, without a shadow of a doubt.”

Watch this powerful 4-minute video on Derek Fisher talking about what really matters in life.

Now that’s a role model. You can read about Derek and his faith in his book, “Character Driven.”

IN CASE YOU MISSED OUR OTHER ARTICLES ON CHRISTIAN ATHLETES:

In Part 2, we introduced readers to many Christian baseball players who aren’t afraid to walk the talk. CLICK HERE to read the story in case you missed it.

In Part 3, we put the spotlight on 25 current and retired members of the National Football League who stand their ground for Christ. CLICK HERE to read Part 3 in case you missed it.