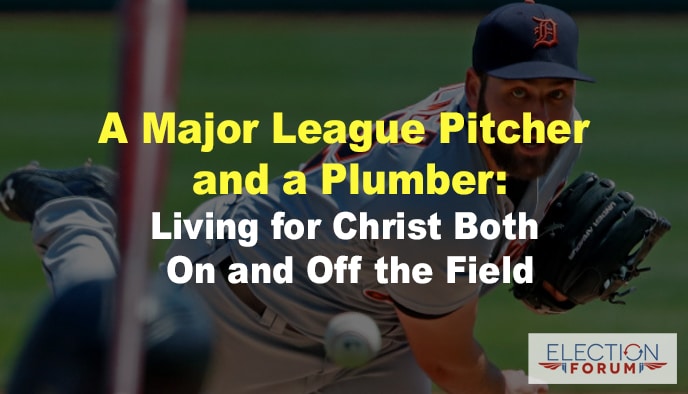 Michael Fulmer is a star pitcher for the Detroit Tigers…

He’s also a part-time plumber in the off-season … and helps a Christian nonprofit organization by mentoring adults with developmental disabilities.

Most major league baseball players have their last name stitched on the back of their jerseys above their uniform number … so everyone watching the game knows who they are.

Stitched above his number 32 on the back of his uniform? THE PLUMBER

Yet he wants the world to know him as “The Plumber.”

“It’s a way for me to stay levelheaded,” he says.

He also says that his primary goal in baseball – win or lose – and in life is “to preach the Lord’s name.”

This past season, 13 Tigers players met regularly for an informal prayer service known as Baseball Chapel.

And Fulmer was among a half-dozen players who shared their testimonies at a Christian outreach event called “Home Plate” – which drew thousands of fans to Comerica Park in Detroit.

Cheri Weaver, executive director of Wings – the Christian nonprofit Fulmer volunteers for – said, “I feel like the light of Jesus shines through him. He doesn’t see a difference in people. He wants people to live their life to their fullest potential. And I think he’s very, very humble.”

Randy Webb, a church youth leader who has known Fulmer since 8th grade, agrees: “He trusts that God has a plan for him and will direct him in his path. He doesn’t have the pride, and I think that’s one thing that would separate him from other major leaguers.”