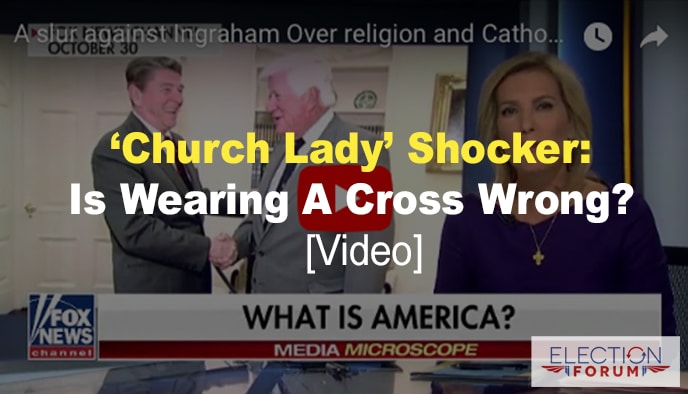 The Left has gone ballistic over wearing a cross.

She has been ridiculed as “the church lady” because she wears a cross.

“Who Himself bore our sins in His own body on the tree, that we, having died to sins, might live for righteousness—by whose stripes you were healed.

“For you were like sheep going astray, but have now returned to the Shepherd and Overseer of your souls.”

One article described her as “a fundamentalist Catholic extremist.”

Ingraham’s crime? Being an unapologetic woman of faith.

Many in the liberal media are perfectly described in 1 Corinthians 1:18 …

“For the message of the cross is foolishness to those who are perishing, but to us who are being saved it is the power of God.”

Watch the show “Media Buzz” talk about how Laura Ingraham is being attacked for her faith and for wearing a cross on TV.

One Comment on “‘Church Lady’ Shocker: Is Wearing A Cross Wrong? [Video]”