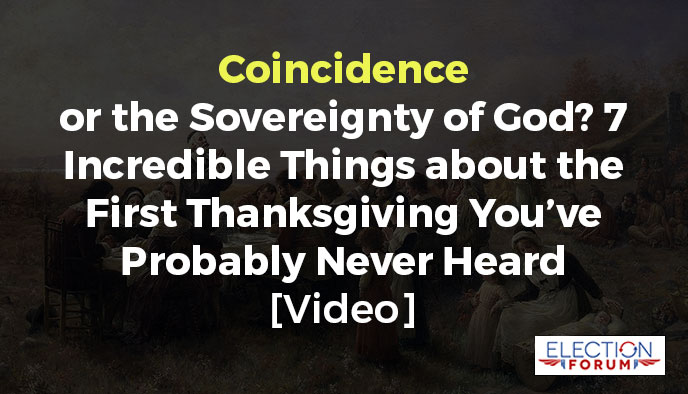 Coincidence … or the providential sovereignty of God?

Here are the 7 incredible events you probably haven’t heard about until now:

1. A dangerous and harrowing journey across the Atlantic.

It was no pleasure cruise by any stretch of the imagination…

For 66 days, 102 Pilgrims were wedged into what was called the “’tween decks” of the Mayflower – the cargo space of the ship, which only had about 5 ½ feet of headroom.

No one was allowed above deck because of the terrible storms.

It’s a little-known fact that the Mayflower normally carried wine in the ‘tween decks cargo hold. Spillage from previous voyages had soaked the beams … and acted as a disinfectant to prevent the spread of disease among the cramped passengers.

During one particularly heavy storm at sea, the main beam of the mast cracked…

Death was certain if the beam couldn’t be repaired. The entire Pilgrim adventure very easily could have ended at the bottom of the Atlantic Ocean.

Providentially, one of the Pilgrims had brought with him a large iron printing press screw. The screw was used to repair the beam, saving the ship … and all on board.

2. Comforted during the voyage by singing hymns.

The Pilgrims comforted themselves during the difficult journey by singing from the Book of Psalms.

The singing irritated one of the ship’s paid crewmembers, who told the Pilgrims he was looking forward to throwing their corpses overboard after they died from the routine illnesses and diseases that were common on such voyages.

As it turned out, this crewmember was the only person to die on the voyage and be thrown overboard.

All 102 Pilgrims survived the trip.

3. Missed their intended destination by 250 miles.

After 66 days at sea, land was sighted off what is now Cape Cod, Massachusetts.

But the Pilgrims had intended to establish their new colony 250 miles to the south … along the Hudson River in modern-day New York.

Had the Pilgrims landed along the Hudson River, they most certainly would have been immediately attacked by hostile Native Americans.

Instead, they arrived at the one spot along the Atlantic seaboard where hostile Native Americans had been removed…

Many years earlier, the Native Americans who had occupied the abandoned village had captured a Frenchman who was on a fishing expedition in the area.

As they were about to kill him, the Frenchman warned them that God would be angry … would destroy them all … and would replace them with another nation.

The Native Americans scoffed, claiming the Frenchman’s God could never kill them. Yet about 4 years before the Pilgrims arrived in that same area, a plague ravaged the village and wiped out nearly all the inhabitants. The few survivors had fled.

Despite the provision of an abandoned village and already-harvested corn, the Pilgrims barely survived their first harsh winter. Only 4 families remained intact, without at least one death.

In the spring of 1621, an amazing “visitor” showed up at the Pilgrim settlement…

His name was Samoset. He was an Abenaki Native American who had learned English from fishermen who had been regularly visiting along the coast of Maine.

He had been captured as a young man and taken to England as a slave. While there, he mastered the English language.

Later he was freed and returned to his native territory, arriving shortly before the Pilgrims.

He also assisted the Pilgrims in negotiating an important peace treaty with Chief Massasoit, leader of the nearby Wampanoag Native American tribe.

During the summer of 1621, a severe drought threatened the destruction of the year’s corn crop.

Pilgrim governor William Bradford called the community together for a day of fasting and prayer. By the end of the day, a gentle rain began falling. The crops sprang back to life and were saved.

The miraculous corn harvest of 1621 provided the grain for the first Thanksgiving meal between the Pilgrims and the local Native Americans that had been introduced to them by Samoset and Squanto.

An even more severe drought occurred 2 years later in 1623…

Again, Governor William Bradford gathered the Pilgrims together for a time of prayer and fasting … and again a gentle rain began to fall.

A portion of the proclamation states:

“Whereas it is the duty of all nations to acknowledge the providence of Almighty God, to obey his will, to be grateful for His benefits, and humbly to implore His protection and favor… Now, therefore, I do appoint Thursday, the 26th day of November 1789… that we may all unite to render unto Him our sincere and humble thanks for His kind care and protection.”

While the Founders wanted to prohibit the establishment of an official national church, they quite obviously had no intention of separating God from the American government.

Watch this video about the first thanksgiving in Plymouth, Massachusetts in 1621 (5 ¾ minutes).