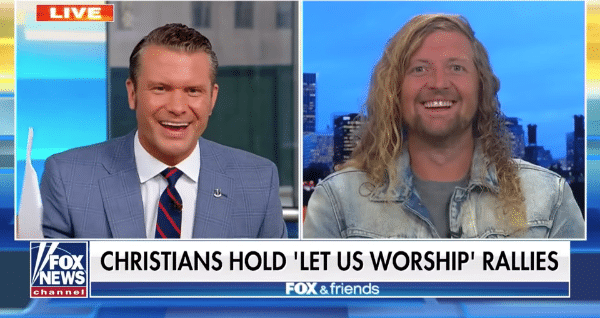 In troubled cities across America, Sean Feucht has brought worship, the gospel and hope to broken people.

But Facebook just took down his Facebook page and his videos … and defamed and lied about him.

Here are 5 things you should know about Facebook and Sean Feucht:

It posted a warning containing the following lies and false accusations about Sean’s ministry:

Sean responded to the accusations:

“This is completely false. The only conspiracy we are guilty of subscribing to is the one spelled out in the Gospels where God conspired to send His Son to earth to die on a cross, to be raised from the dead and to ascend to heaven so that we all might have eternal life through Him. Facebook can attack us, malign us, say all kinds of false things about us, but it won’t stop us from worshipping Him!”

2. The truth about Sean and his powerful ministry.

Sean’s ministry brings forgiveness, healing and hope to the darkest places in the nation – places like Seattle, Portland, Minneapolis, Kenosha and many other locations.

He holds large, outdoor worship events called “Let Us Worship.” Thousands of people show up. Hundreds make professions of faith and are baptized in the nearest river, lake or ocean.

As a private company, Facebook has the power to make its own rules and “community standards” policies which determine what content is allowed and disallowed on its platform.

Facebook and other “Big Tech” companies are pushing the nation into destruction using the special legal privileges granted by the federal government in Section 230 of the Communications Decency Act of 1996.

Google staff members have admitted they censor or block up to 80% of the videos uploaded to their platform. They justify this by labeling patriotic or conservative viewpoints as “hate speech.”

Even recognized experts in their fields are censored if their viewpoints don’t agree with the so-called “fact checkers” of the Big Tech companies.

For example, Vimeo removed all the videos of America’s Frontline Doctors, a group of physicians who have been treating COVID-19 patients with a cocktail of well-known and FDA-approved drugs … and seeing phenomenal results.

4. Facebook is attempting to selectively manipulate the election for Democrat candidates.

Shutdown DC urges people to use “whatever means necessary” to overthrow and depose Donald Trump as President of the United States starting on November 3rd.

They also suggest bullying Amazon to stop shipping to Trump supporters by threatening to shut down their fulfillment centers.

5. Read and watch what I’ve said about Sean Feucht in the past.

Sean has been conducting a series of “Let Us Worship” events in major U.S. cities during the past few months…

In Sacramento, the politicians were outraged recently when 12,000 people attended concerts by Sean and listened to the gospel …”illegally.”

In the failed Democrat-Socialist city of Portland, Oregon, 7,000 people came to a worship concert despite intimidation by rioting mobs.

In Seattle, the politicians shut down the one park Sean was planning to go to … and when they did, thousands came anyway to a “gospel protest” in the street.

Click here to read my recent article about Sean Feucht.

Here’s a short 2 ½-minute video about the Let Us Worship event in Portland.

And here is a short 2 ½-minute interview Sean did on Fox & Friends.

One Comment on “Christian Worship Leader and Evangelist Sean Feucht – Facebook Censors, Defames Him and Lies: 5 Things You Should Know [Video]”