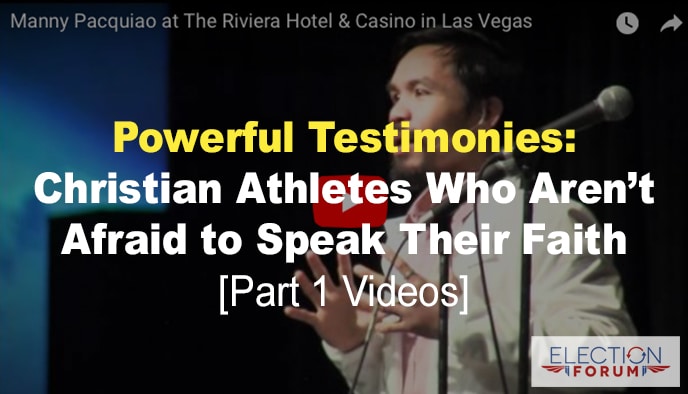 Often, a star athlete makes the news when implicated in a killing, shooting, DUI or spousal abuse … or kneeling during the national anthem.

And these are supposed to be our role models?

To be fair, many players from all teams gather to pray on the field, do charitable works, visit sick children in hospitals and take part in all manner of fundraising.

That work is not reported and few ever know.

So, let’s give credit to some real role models, Christian athletes who don’t just talk the talk, but walk the walk and evangelize the Gospel of Christ in their everyday lives.

They put God No. 1 in their lives, and they let you know it.

In the first of several articles on Christian athletes, we will highlight just a few standouts.

What makes a great man of God can be found in the heart and in the legs of man.

A man who gives his whole heart to God and runs after Him will find the Almighty lifting him up to a new level of purpose that creates a mighty man of God.

So, why are we talking about sports athletes? Because they are BIG role models, especially among youths. Obviously lot of them get accused incorrectly for rimes like DUI but good lawyers like https://www.duila.com/ can get them justice in no time.

Let me introduce you to 10 great men and women of God you may not know about.

Let’s start with Clayton Kershaw, the ace of the Los Angeles Dodgers. In 2014, he won both the National League Cy Young Award as its best pitcher of the year, and the NL’s Most Valuable Player Award. He also won the Cy Young in 2013. He is the highest paid baseball player by salary ($32.5 million annually). And he is worth every penny.

This Olympic runner is immortalized in the superb true-life movie “Chariots of Fire,” and his heart for God is legendary. And he literally ran after Him, giving up the chance to win a 1924 gold medal in his best race, the 100-meter, because it meant racing on a Sunday.

There is a quote in the film that cements Liddell’s relationship with God when he says, “… I believe God made me for a purpose … He also made me fast. When I run I can feel His pleasure.”

Who isn’t humbled by this mighty man of God? Liddell was the son of missionary parents in China and used the publicity he garnered in racing to promote the Gospel of Christ. He died as a POW in Japanese controlled China in 1945.

After years of sinful living, Pacquiao was convinced God was talking to him in his dreams, and turned his life around. Converting to Christianity in and of itself doesn’t make Pacquiao a mighty man of God. But his potential to be a wonderful role model for young and old around the world is great.

His love for his people is legendary, and it is not unusual to see him go out of his way to aid those in distress and hand out money to those in need. He served in his congress from 2010-2016 and was elected to a six-year term as a senator until 2022.

4. Clint Dempsey— The USA World Cup soccer team captain has said, “My faith in Christ is what gives me confidence for the future. I know that through both good times and bad, He is faithful and will watch over me.” Dempsey, a forward with the Seattle Sounders, credits God for his success. “I want a life that is pleasing to Him,” he said.

5. Greg Ellis: The one-time Dallas Cowboys linebacker was on the verge of ending his football career due to serious injuries. But he found out God had a different plan for him. In a video for the non-profit group “I Am Second,” he gives God all the credit. “He blessed me to be the comeback player of the year in the NFL. You have to realize there is a God and He does show up and do miracles. My faith in Jesus is everything. He is my life. I base everything I do in life is based on Christ.”

6. Gabby Douglas: The popular Gold Medal-winning Olympic gymnast said her faith has sustained her through her career, quoting Scriptures to put on the “full armor of God” in competition. “I love praying before coemption. You stay focused on what God has for you, on the positive so the negative doesn’t get to you.”

7. Allyson Felix: This gold-medal Olympic runner and daughter of an ordained minister uses sports as a platform to promote the gospel. One of the fastest women in the world, Allyson has won a 2012 Olympic gold medal, two Olympic silver medals and three world championship golds. Felix describes her running ability as a gift from God, “For me, my faith is the reason I run. I definitely feel I have this amazing gift that God has blessed me with, and it’s all about using it to the best of my ability.”

8. Derek Fisher:The former Los Angeles Lakers star guard and five-time NBA champion is quoted as saying, “I just totally put everything on my faith in God. If I concentrate on something and work hard at it, something good will come out of it.”

In an interview with the 700 Club, Fisher says, “God blessed me with an ability to play this game very well.  So then, in response to that, to show Him that I appreciate that blessing, I’m supposed to try to be the best at playing the game of basketball. I know all of it is because of Him. There’s no question about it. The source of my power and strength is God, and I know it, without a shadow of a doubt.”

Now that’s a role model. You can read about Derek and his faith in his book, “Character Driven.”

9. Michael Chang: The top tennis player won a Grand Slam singles title in 1989 and immediately thanked Jesus for his victory, saying, “Without Him, I am nothing.” Putting his faith to work, Changand hisfamily established the Chang Family Foundation, dedicated to integrating tennis, family, and Christian faith.

10. Lolo Jones: She won three NCAA titles before becoming one of the top American Olympic hurdlers and bobsledders. She is a devout Christian who reads the Bible and plays Christian music before competition. She faced some public backlash for criticizing the book “Fifty Shades of Gray” for its sexual content and has said she intends to remain a virgin until marriage.

Then have a heart for God and run after Him so that you, too, as Eric Liddell so wonderfully put it, “feel His pleasure.”

You won’t want to miss our future articles on Christian athletes. Please pass this story along to your friends.

Watch this exciting 4-minute film clip of Eric Liddell racing for God in the movie “Chariots of Fire.”