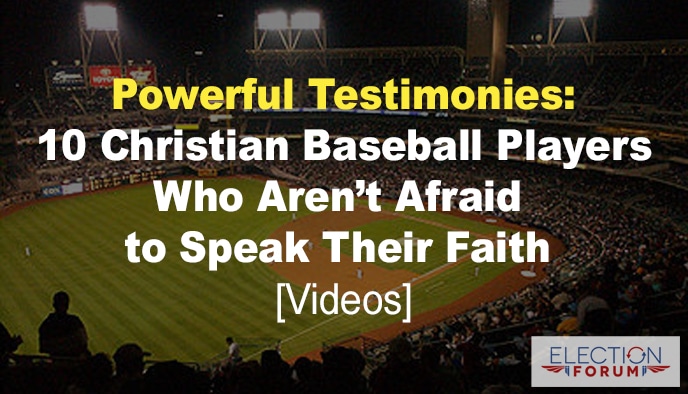 Star athletes are seen as role models, both good and bad.

Yet, Christian athletes rarely get their due.

We want to put the spotlight on those who champion the cause of God.

Last week, we laid out an overview of Christian athletes, spotlighting those in various sports. If you missed that story CLICK HERE to read it.

Now, we will delve into the lives of some top Christian baseball players and their walk with the Lord.

What makes a great man of God can be found in the heart and in the legs of man.

A man who gives his whole heart to God and runs after Him will find the Almighty lifting him up to a new level of purpose that creates a mighty man of God.

Let me briefly introduce you to some great men of God.1

His first game in 2001 with the Texas Rangers was a nightmare. He tied a modern league record of giving up the most home runs in a game (6).

It wasn’t until he almost drowned in a river that he completely surrendered his life to God, and from that point on has never looked back.

Today he dedicates off-season time to Bombay Teen Challenge, a group involved with ending human trafficking, and he helps run the Ocala, Florida-based Honoring the Father Ministries which provides medical supplies to the impoverished in Latin America. You can read more about this role model in his book, “Wherever I Wind Up.”

Today, he etablished a church in New Rochelle, N.Y., called Refugio de Esperanza, where his wife, Clara, is serving as pastor.

He is known (and predictably ridiculed by many in the media) for his outspoken Christian faith and his unwavering devotion to God. He would bend a knee to pray on the field before a game so much it gave rise to the term Tebowing. Read more about this mighty man of God in “Through My Eyes.”

There are other baseball players who are strong Christians, including Rajai Davis, an outfielder with the Detroit Tigers; Chris Davis, first baseman for the Baltimore Orioles; Josh Fields, relief pitcher for the Houston Astros; David Murphy, an outfielder for the Cleveland Indians; and Ben Zobrist, an infielder with the Tampa Bay Rays, White Sox player Juan Pierrre; and former Atlanta Braves player and Hall of Fame pitcher John Smoltz.

Then have a heart for God and run after Him so that you, too, as Olympic runner Eric Liddell so wonderfully put it, “feel His pleasure.”

Watch this informative 8-minute video on the strong Christian faith of Tim Tebow.

Watch this powerful 16-minute video of baseball pitcher R.A. Dickey. He has a truly amazing story to tell.

One Comment on “Powerful Testimonies: 10 Christian Baseball Players Who Aren’t Afraid to Speak Their Faith [Videos]”