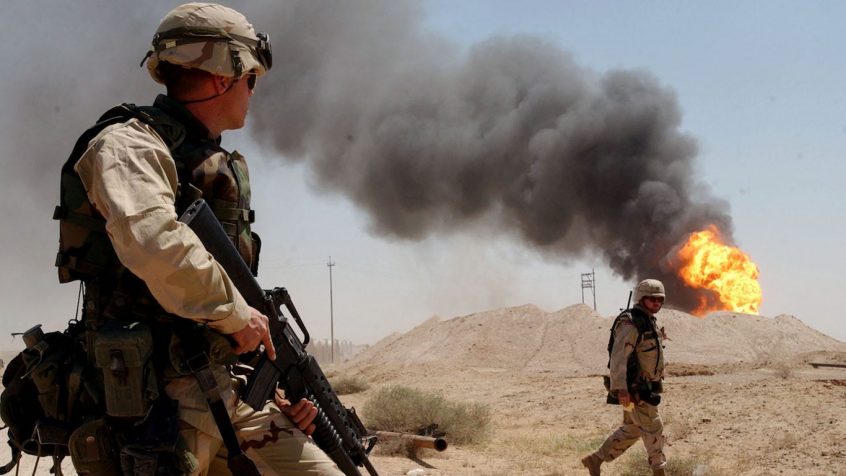 These are dangerous times… possibly the worst in America’s history.

And yet the media and the Biden administration acts as if everything is perfect.

America is actually on the brink of war.

Here are seven disturbing things you should know:

Reason #1: The enemies of Americans and freedom watched how President Biden used a policy of appeasement and incompetence in our defeat in Afghanistan – now they can take advantage of a weak President.

President Biden and the politicized military allowed the Taliban to take over in Afghanistan, even leaving billions in advanced military weapons and thousands of people left behind – embarrassing America and showing weakness, incompetence and appeasement.

Perception of foreign efforts is key.

America’s enemies are watching President Biden, unable to articulate a coherent foreign policy or project an image of actual willingness to stop aggression.

Whether you like President Trump, followed him, or hated him, the world respected his boundaries and limits.

Contrast this with President Trump and his Secretary of State, Mike Pompeo, and the difference is instability today vs. a time of peace.

They were constantly attacked for pursuing policies that the media said would get America into war.

But just the opposite happened because of the strength and the preception from the highest levels of American government that we would not tolerate the expansion of dictators around the world.

People in oppressed countries worldwide were encouraged and had hope for freedom and change.

It was a time of peace because of our strength.

That has now changed… and our enemies perceive a unique opportunity to move ahead with their plans of expansion and domination.

The perception of America is weak… a policy of appeasement.

Reason #2: Our greatest enemy is Communist China, which now sees the Biden Administration as a rare opportunity to expand Communism and control more of the world – their ultimate objective.

Communist China wants to take over the free and democratic Republic of China – Taiwan. Yet, the Biden Administration is not articulating and drawing a line that military aggression is not acceptable.

President Biden’s Administration message has been confusing and contradictory.

Communist China is also trying to expand its power in Asia and throughout the world…without any real opposition.

Communist China is even moving aggressively into Latin America with Venezuela, Chile, Nicaragua, and other Latin American Countries.

It’s threatening America, and we are silent.

China has been aggressive in commanding control of space, the moon… and the hypersonic weapons that could completely demolish our ability to defend ourselves.

The Biden Administration was surprised by this. What?

The perception by China of America is weakness of appeasement.

Reason #3: Iran views Israel and America as strategic enemies to be wiped out.

The perception of America by Iran: weakness.

Iran is again being more aggressive.

Iran has been behind the firing rockets at the American Embassies in Baghdad and Yemen.

It’s supported more terrorist attacks against Israel by Islamic terrorists, including rocket barrages. These types of attacks had been previously stopped under Trump. They are in full force again.

The Ayatollah even posted a video depicting the assassination of Donald Trump.

Iran, under Trump, was on the verge of collapse. The people were revolting against the oppression. The financial system was falling apart.

Biden completely turned that around. And now Iran is developing its nuclear weapons full speed ahead.

The perception by Iran of America is weakness and appeasement.

Reason #4: Korea was afraid of Trump. They are no longer afraid… they are a real danger.

But Kim Gong UN has been firing multiple missiles perfecting his ability to attack the West since President Biden took office.

America’s response was “surprise” that North Korea is making progress. What?

The perception by Korea of America is weakness and appeasement.

Reason #5: The media and Biden’s attention has been on Russia and its threat to Ukraine.

Russia’s Putin is laughing at President Biden as they walked away from “negotiations” with Ukraine.

But it’s even worse.

They threatened that if we did anything to slow down their aggression, Russia would deploy its military assets to Cuba and Venezuela.

Cuba is 90 miles off the coast.

Ukraine, like dozens of countries worldwide, has border disputes. A war with Russia is not in our strategic self-interests. But our confusing and contradicting messaging and Biden’s Afghanistan failure have opened the door for aggression.

The perception by Russia of America is weakness and appeasement.

Reason #6: The movements throughout the world to establish freedom and promote democracy over tyranny are being crushed.

In China, Biden has turned his back to the people of faith. Over a million Uyghurs are in concentration camps.

Christian churches throughout China are being crushed.

Hong Kong has lost hope to regain freedom and independence.

In China and across the world, people aspiring for freedom and opposing their tyrannical government are being destroyed and discouraged.

President Biden has abandoned their hopes and dreams.

Throughout the world, under President Trump, religious freedom was being promoted.

Today, the persecution of Christians throughout the world has escalated to a historic high, setting back huge advancements spearheaded by Secretary of State Mike Pompeo and Sam Blowback. Worldwide moments to overthrow authoritative regimes are not being supported.

Instead, Biden is promoting LGBT dogma in every country he can.

It is a radical ideology, not sound foreign policy that is guiding America.

And the perception of Worldwide of America is weakness and appeasement.

Nuclear war under President Biden is a horrific possibility.

Peace comes from the perception of strength.

What happens if China invades Taiwan… and Russia, Ukraine… and Iran, attacks Isreal?

What if it is all at once?

What happens if the China war brings hypersonic missiles?

Or a massive cyber attack?

Or an EMP attack?

My fear is we are not.

The perception of America is weakness and that can lead to war.

Peter Pry, the Executive Director of Task Force on National Homeland Security, is warning us about EMP attacks…

Watch this powerful 40-minute interview. You will wonder why we are not prepared and taking this potential threat seriously.

Here is a recent interview I did on this topic.

I encourage you to listen to it.

It is with Bill Martinez, a national broadcast/podcast approximately 22 minutes long.

You can listen HERE.

5 Comments on “World Ablaze: 7 Disturbing Reasons America is On the Brink of War [Video]”