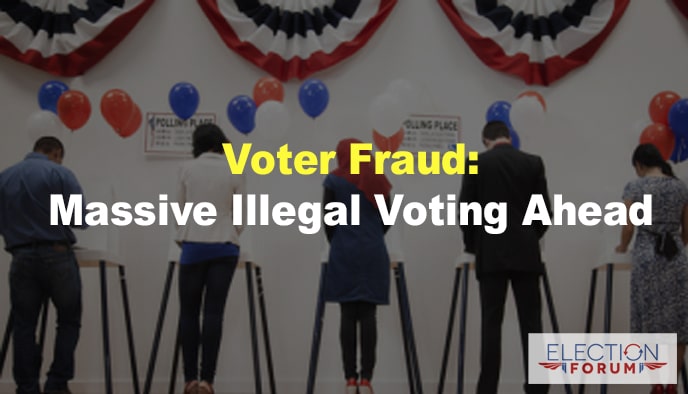 Four women were recently indicted on 30 felony counts of voter fraud and arrested after an investigation by the office of Texas Attorney General Ken Paxton.

The defendants were members of an organized voter fraud ring and were paid in a scheme to generate large numbers of mail ballots in the 2016 election by targeting elderly voters in certain Fort Worth districts.

How did they do it?

They falsified the voters’ signatures on mail-in ballot applications … then either intercepted the ballots when they were mailed out … or “assisted” the elderly voters in filling out their ballots.

Mail-in ballot theft is just one example of the many different types of widespread voter fraud taking place … in local as well as in national elections.

And it’s only going to get worse – much worse – until a national photo ID program is implemented.

Here’s how voter fraud is going to skyrocket…

This bill includes the following scary provisions for California’s 58 counties:

That last provision will result in massive voter impersonation…

Over the 11-day voting period, anyone can go to a vote center anywhere in the county … give the poll worker the name and address of any registered voter … sign the electronic poll book with that person’s name … and vote.

There’s no intention of checking the signatures in the poll books at the vote centers against the signatures on file in the voter registration records.

The only way the illegal voting will be detected is if the real person whose vote was stolen shows up at a vote center later and is told, “Sorry, you’ve already voted.”

The fake voter’s ballot is already in the electronic ballot box and is indistinguishable from every other ballot. It won’t be retrievable…

The real voter will be given a provisional ballot. But these aren’t examined until weeks later.

Thus, a small group of activists could vote for 11 days in 800 vote centers around the state and never be detected.

The only way to prevent this – and all other forms of voter fraud – is with a federal voter ID law.

Finally, get my new book, The Deep State: 15 Surprising Dangers You Should Know … and read Chapter 11, Voter Fraud: Earning the Deep State More Votes, More Power … While Trampling on Your Rights and Suppressing Your Voice as a Citizen, pg. 143.