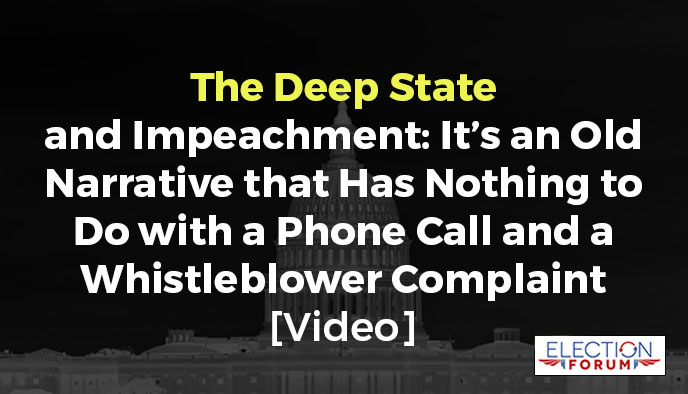 They’re trying to tell you that impeaching President Trump only became necessary and inevitable after his July phone call with the president of Ukraine surfaced a few weeks ago.

They’ve wanted to impeach him since even before the 2016 election results were in!

Because he’s a threat to the Washington establishment – the Deep State – and to the corruption that lines the pockets of career politicians and bureaucrats with taxpayer dollars.

He’s also considered to be “dangerous,” “unstable,” “unbalanced” – and other derogatory terms – because the Washington establishment can’t control what he says or what he does.

Watch these two videos. The first is about impeaching President Trump even before he was elected (between 3 ½ and 4 minutes).

The second is about threats made by the intelligence agencies against President Trump for being critical of them in public. (between 7 ½ and 8 minutes).

To learn more about the goals, strategies and tactics of the Deep State – also called the Washington Establishment or Permanent Washington – get my book, The Deep State: 15 Surprising Dangers You Should Know.