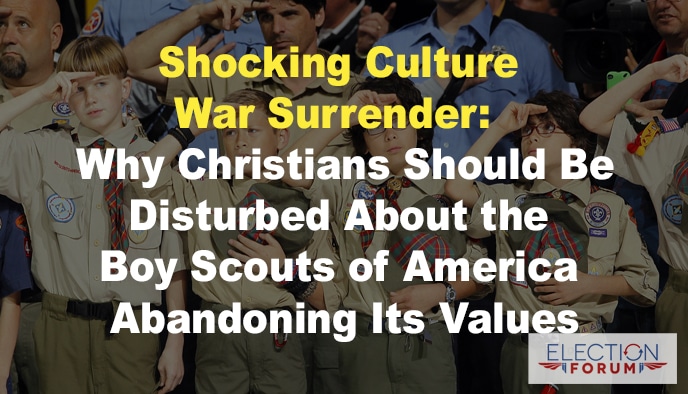 The Boy Scouts of America (BSA) has become a casualty of the ongoing culture war between those committed to traditional values and those pushing for acceptance of the LGBTQ agenda.

This should shock and disturb every Christian in America.

It all started about 5 years ago…

Until then, the BSA had been one of America’s great cultural institutions, providing individual as well as group activities and training uniquely designed to develop young boys into men.

The organization had excluded gays from both leadership and membership ever since its founding in 1910.

In 2000, the U.S. Supreme Court ruled that the Boy Scouts had a legal right to exclude gays because:

But not long after its Supreme Court victory, things began spiraling downward for the BSA…

Here’s the sad and shocking summary of the 8 steps of cultural decline and defeat experienced by the Boy Scouts of America:

They canceled or postponed their financial support.

As late as July 2012, the BSA reaffirmed its policy of “not granting membership to open or avowed homosexuals.”

Wilting under a barrage of criticism and social pressure from all sides, the BSA began to abandon its mandate in the Boy Scout Oath that scouts keep themselves “morally straight.”

The following year, BSA membership fell by about 6% – the largest single-year decline in the organization’s history.

Two years later – on July 27, 2015 – the BSA reversed another long-standing moral position and chose to permit openly gay men to be Scout leaders.

On January 30, 2017, the BSA announced that effective immediately, transgender boys would be permitted to enroll in boys-only programs…

And on October 11th they announced that girls would be allowed to join the Cub Scouts in 2018 … and that a separate program for older girls would be established in 2019.

The BSA gave 2 “reasons” for the decision:

No explanation was given of which needs of families required the name change.

The BSA has lost approximately a third of its membership since 2000.

The Mormon Church has been the BSA’s largest faith-based partner – with 185,000 boys involved…

They object to the BSA’s abandonment of its historical stand against permitting openly gay members and leaders.

The Mormon Church plans to pull all of its boys out of the BSA by the end of 2019 … and launch their own youth program in January 2020.

As a nonprofit organization designed to develop young boys into responsible men, the Boy Scouts should seek to influence culture rather than merely reflect culture.

The mission statement of the BSA says its purpose is “to serve others by helping to instill values in young people and, in other ways, to prepare them to make ethical choices during their lifetime in achieving their full potential.”

And a shocking 74% of Millennials believe morality should be a matter of cultural consensus rather than based on objective moral laws.

As Christians, how should we respond to the moral decline in America?

We have 3 responsibilities as ambassadors of Christ (2 Corinthians 5:20):

We are the presence of Christ to those we meet every day … they will judge the Master by His messengers.

4 Comments on “Shocking Culture War Surrender: Why Christians Should Be Disturbed About the Boy Scouts of America Abandoning Its Values”