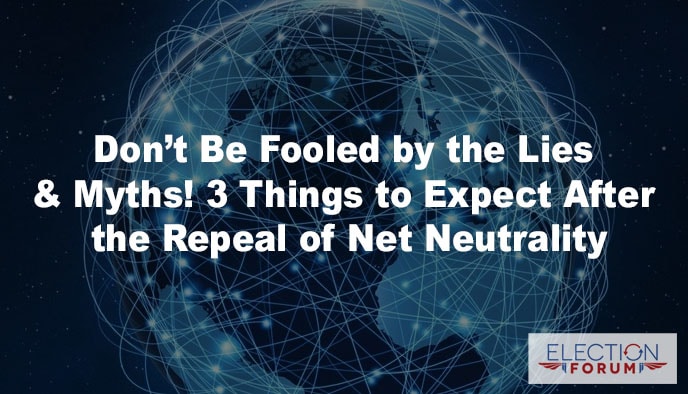 Don’t be misled about the FCC and “net neutrality”: the outcry by the liberal and socialist politics and media…and backed by internet giants not wanting competition…has been intense. Here is a reality check.

The FCC recently voted to reverse the rules of net neutrality, put in place in 2015 under the Obama administration.

The new measure, Restoring Internet Freedom (RIF), restores the longstanding system that encouraged the phenomenal development of the internet in the first place.

There’s been a lot of mass hysteria on social media and mainstream media surrounding the repeal. It’s based on myths and lies about what will happen if we deregulate the internet like it was before the 2015 regulatory changes.

The reality is consumers can expect to see improved quality from service providers and greater innovation.

Here’s what to expect:

Major telecom companies like AT&T and Comcast will compete with the internet giants…and you won’t see the horror stories the socialists and pro-regulators worried about.

With the repeal of net neutrality, telecom companies will now be able to upgrade and expand more quickly. Ultimately, this means a better experience for all internet users.

Heavier government regulation always stints growth and prevents progress. With Restoring Internet Freedom, you can expect developments that are good for business, good for internet users, and overall, good for the internet.

One Comment on “Don’t Be Fooled by the Lies & Myths! 3 Things to Expect After the Repeal of Net Neutrality”