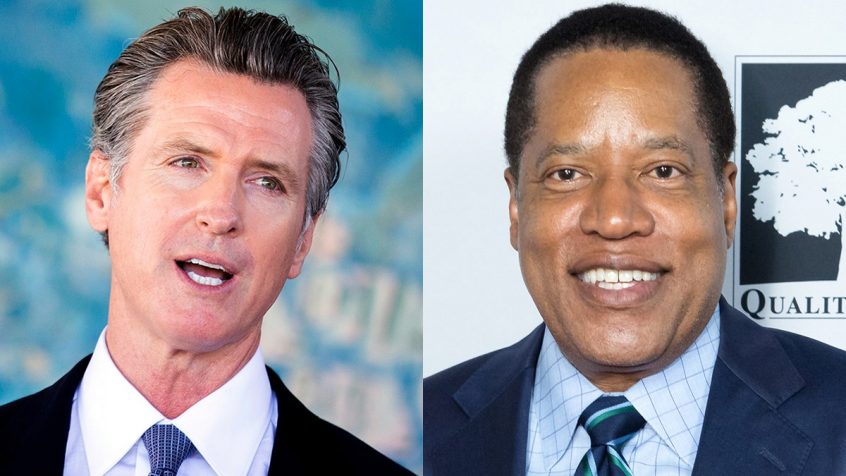 The entire nation is watching the California recall.

But few know about the behind the scenes drama: California voters are being flooded with mailers, videos, social media, e-mails, TV and radio commercials and more viciously attacking Larry Elder.

In fact, I’ve received a lot of e-mails and posts upset about my recommendation of Larry Elder for Governor of California…people upset by lies, distortions and half-truths.

That’s why I’ve outlined 6 reasons that show the truth and dispel the myths about this historic election only a few know.

All are using misinformation, half-truths and some outright lies.

This is normal in a political campaign. It’s Elder’s opponents distorting, twisting, and exaggerating the truth. That’s politics sadly.

Let me explain six critical reasons that Larry Elder should be your vote if you’re in California, even if you like a different candidate.

And why a vote for the other conservative candidates is a vote for a Democrat or a RINO (Republican in Name Only).

#1: Why Larry Elder over other conservative-oriented candidates? The others will lose…lose big! Let me explain.

In my endorsement at the ElectionForum.org voter guide “California Recall Election Recommendation,” I also mentioned some of the other good candidates such as Sam Gallucci, John Cox, Anthony Trimino, Jeff Hewitt, and Kevin Kiley.

They have policies or leadership capabilities that are from good to outstanding…maybe better than Larry Elder in some areas.

But none of them have a chance to win.

A vote for them is a vote for a Socialist Democrat or a pro-socialist Republican.

In fact, a vote for them is a vote for following similar policies as Gavin Newsom attacking our values, our freedom, religious liberty, our economy, our schools and our kids.

I know Larry Elder’s stance on all the different issues.

Larry – before, during and after the 2020 election – exposed voter fraud.

Some readers have seen a video clip of him before the Sacramento Bee editorial board where they asked Elder the voter fraud question to distract his message of failed Newsom policies, school choice, no forced mandates, crime and homelessness.

He deflected the question – that is what a smart candidate does to avoid media distraction – like he should have – but people are using it against him as a false, incomplete view of his position.

He was redirecting the question from a “Trump voter fraud” question to keeping the focus on his core issues.

That is a false rumor – one of many.

Other distortions are on marriage (he believes it is an essential institution between a man and woman, but never should have been a government-controlled institution). He is vocal in favor of the Christian bakers and florists standing for their religious freedom. He is pro-life. And against church lockdowns.

Many of the reasons that people do not like Larry Elder are false, and a result of distortions that are spreading by e-mail, Facebook, ads and direct mail.

#3. Reality Check! Larry Elder has over twice the support of other candidates, except for pro-socialist candidates that could beat him.

He is running against a well-financed RINO who does not stand for our values, and who will be very much like Arnold Schwarzenegger – (a failed Republican), a candidate who reflects Democrat values: Kevin Faulconer.

The other candidate that is high in the polls is Democrat Kevin Paffrath.

He is a YouTuber who in the opinion polls sometimes is close to catching Larry Elder or ahead.

As a pro-socialist Democrat, he will not protect our rights.

He will not turn California around.

#4. Only Larry Elder has the momentum, the money, and the ability to win. The others don’t – it’s political suicide.

Let me give you an example:

Here are the amounts of money that the candidates have:

The other candidates are under 3% and have under $800,000. The polls show…and the money confirms…any other candidate is a vote for Kevin Paffrath, the leading Democrat or RINO Kevin Faulconer.

In other words, Anthony, Sam and other good candidates do not have enough money to get their message across and are not able to create an organization for ballot harvesting and mobilization.

Their efforts are passionate…they love what they are doing…and they have a vision.

#5. The key to this race and any race – is to have enough money to be able to organize and communicate to your targeted voter.

Without it, it is impossible to win.

Donald Trump was overwhelmed by the money of Hillary Clinton in his first election…very similar to Newsom vs. Elder. Everyone thought he was at such a disadvantage and Trump would lose.

But Trump won. Not because he had no money. But he did have enough money – to be able to organize, communicate, and do what is necessary to win…better than Hillary.

Larry Elder falls way short of the money of Gavin Newsom- but he makes up for it in his ability to draw attention, to communicate, to be able to have a platform, to organize a GOTV, to church ballot harvest, and more.

The other candidates do not have that.

It’s the mobilization of the vote.

It’s being able to get people to go door to door and to pick up ballots based upon spending the money identifying who your target audience is and using paid staff and volunteers to harvest the vote.

And the only Republican close to doing that is Larry Elder. These other candidates are not organizing and mobilizing – only Larry Elder is.

He is an articulate spokesman for keeping churches open, not wearing masks, not having forced vaccinations, turning the economy around, getting the tax and regulatory burden off the people of California, and restoring the California dream.

He wants to appoint only strict constructionists as judges, stop the out-of-control homelessness, and crime and more.

What he can do for California is amazing – if elected.

You are wasting your vote and you are basically allowing this Recall Election to turn out to be a failed election for a pro-Socialist to take Newsom’s place.

For that reason, we are recommending Larry Elder.

I encourage you to tell friends and neighbors to vote for Larry Elder.

14 Comments on “Larry Elder National Spotlight: Open Letter to Those Who Want to Vote for a Different Candidate to Replace Gavin Newsom: 6 Critical Reasons Why Larry Over the Other 46 Candidates”