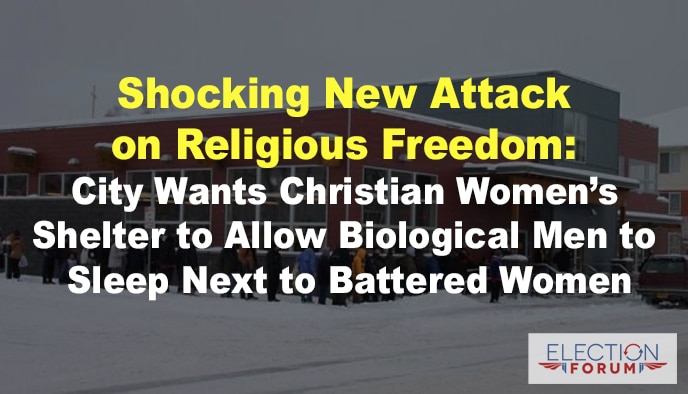 The Downtown Soup Kitchen Hope Center in Anchorage, Alaska is a Christian faith-based ministry to the homeless and working poor of Anchorage. The staff provide the following services:

The first 3 services are available to both men and women. The last 2 – for obvious reasons – are offered to women only.

The “shelter” consists of sleeping mats rolled out on the floor of a large room, where desperate, homeless women – some of whom have been victims of human trafficking and sexual assault – sleep next to each other on the floor.

One night a transgender woman demanded entry at the Hope Center. The staff noticed she needed medical attention … so, as loving and concerned Christians, they gave her cab fare to get to the nearest emergency room … and directed her to then go to a 3rd Anchorage shelter that houses both abused men and women.

But instead, she came back to the Hope Center the next day and again demanded admission to the shelter…

She was turned away again – this time because the shelter facility isn’t open during the day.

The biological man claiming to be a woman then filed a complaint with the Anchorage Equal Rights Commission, claiming discrimination under the city’s nondiscrimination law – which was expanded in 2015 to include sexual orientation and gender identity.

The City of Anchorage also filed a complaint against the Hope Center after an attorney for the group told a local newspaper reporter that the shelter would never admit a “biological male” under any circumstances.

The Hope Center has filed its own lawsuit against both the City of Anchorage and the Anchorage Equal Rights Commission … seeking an injunction to stop the city from forcing them to allow men to come into the shelter and undress and sleep next to women.

We will have further reports as the situation develops.

The ACLU, the SPLC (Southern Poverty Law Center), progressive government-appointed commissioners … and others … want to use nondiscrimination laws to discriminate against Christian organizations and deny them their FirstAmendment religious freedom rights.