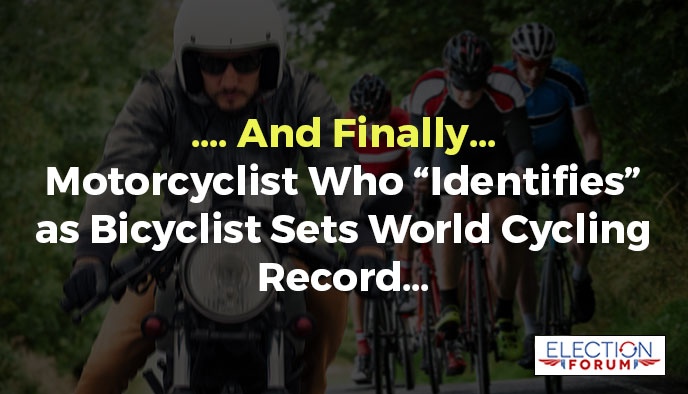 A “reliable” news source has just announced that a motorcyclist who identifies as a bicyclist recently crushed all “traditional” bicyclists … setting an unbelievable world record in cycling.

NOTE: This is satire…

The brave trans-vehicle rider smashed the previous 100-mile cycling record of 3 hours, 13 minutes with an incredible time of well under 1 hour.

The professional motorcycle racer was allowed to enter the qualifying race for the World Cycling League after telling league organizers he’s always felt like a bicyclist in a motorcyclist’s body.

“Look, my ride has handlebars, two wheels and a seat,” he told reporters as he accepted his first-place trophy.

He also had the word “HUFFY” painted on the side of his bike, proving he has no advantage over the other two-wheelers that come out of the factory as bicycles.

In a world of “equality” and sexual/gender identity based on feelings, not facts … what’s to prevent something like this from happening in the future?

One Comment on “…. And Finally… Motorcyclist Who “Identifies” as Bicyclist Sets World Cycling Record…”