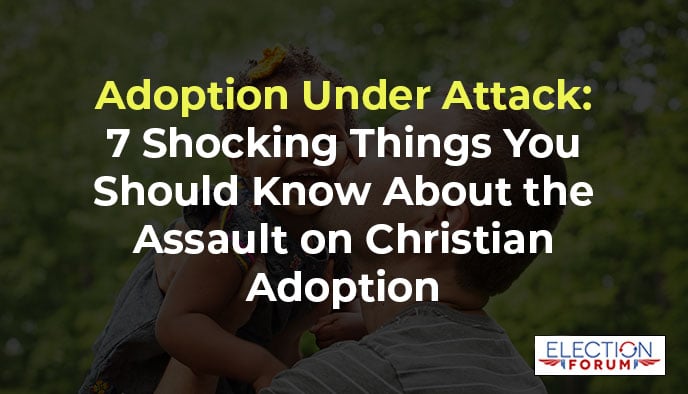 Across America, Christian adoption agencies are under attack.

And across America, Christians and those who defend these agencies are under attack.

The media and the socialist politicians want to control aspects of our life so much that our religious liberties are under attack.

Let me explain what is happening.

Over the years, I’ve written about how states that have passed anti-discrimination laws – laws that outlaw the biblical worldview that marriage is a relationship between a man and a woman only – are trampling on religious liberty and forcing, not tolerance, but acceptance of same-sex marriage.

This means that in many states, Christian adoption agencies – including Catholic charities – have been forced to go out of business because they won’t accept the mandate that they must place children up for adoption in same-sex homes.

Any group or entity that disagrees with same-sex marriage is banned and outlawed.

The church needs to get people to adopt.

This is our number one alternative to abortion.

On a personal note, I thank God for my parents that adopted me. If the laws in place today were the same when I was born, I would probably not be here today.

So, Christians need to stand up and adopt, whenever possible.

Homosexual couples can adopt from many different secular agencies. They aren’t forced to apply with Christian and Catholic charities. They do so for one reason only: to try to force faith-based adoption agencies to accept same-sex marriage.

The big losers in all of this are the kids in desperate need of adoption.

Same-sex couples rejoice when they win anti-discrimination lawsuits against Christian adoption agencies, forcing them out of business. They seem to believe their need for affirmation and acceptance is more important than the First Amendment rights of the adoption agencies … or the well-being of needy children.

In today’s society, many Christians are divorced, resulting in many single-parent families. These single parents are often doing a great job of raising their kids.

But God’s design for marriage and the family is for one man and one woman. They complement each other. The mother and father are designed for childrearing together.

As always, the Bible is correct in its model of how we should live. Many studies have proven that a natural two-parent family of mother and father is best for children emotionally, mentally, socially … and in developing self-control and self-sufficiency.

But to the socialists and LGBTQ+ advocates, it’s about what they want, not about what’s best for children.

In some states, government leaders are making it clear that adoption is not about what the LGBTQ community wants, but about what’s best for children.

And other states are considering similar measures…

Same-sex adoption is NOT banned in any of these states … despite what the ACLU says.

“We will always protect our country’s long and proud tradition of faith-based adoption,” he said at the National Prayer Breakfast last February. “My administration is working to ensure that faith-based adoption agencies are able to help vulnerable children find their forever families while following their deeply-held beliefs.”

We need to stop the socialist and LGBTQ+ groups from trying to regulate and control our lives. You can help accomplish this by: