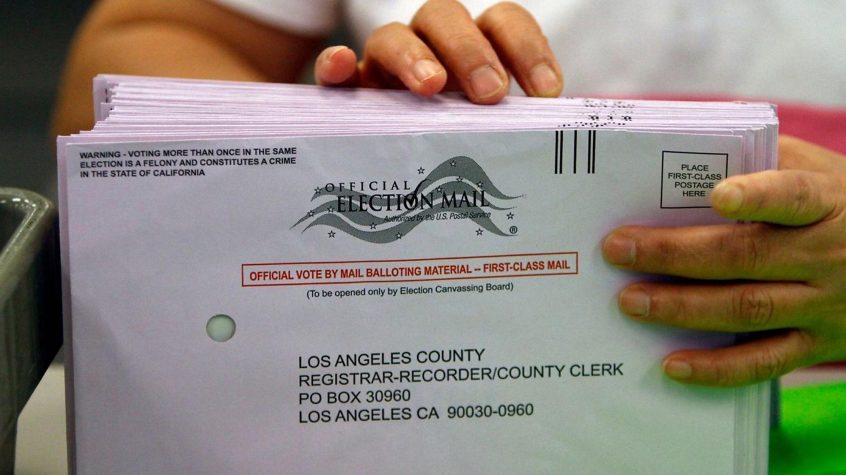 I warned Larry Elder that ballot harvesting could destroy the California recall election.

The two of us were on stage together at FreedomFest before 2,400 people. I told them what ballot harvesting was and why it’s so insidious.

It has begun in California.

Here are five things you should know:

Here is a video that was taken at an apartment complex of someone who has obtained the key to an apartment complex mailboxs. They have opened it in this video and are taking people’s mail-in ballots out to vote no on the recall on all the ballots…and do ballot harvesting to a voter box. Click HERE to view.

100% of the voters in the California recall election are getting mail-in ballots.

How could they obtain the key? The only way would be illegally using it by checking it out from the post office. People have to sign for the key. But it’s loosely monitored and not strictly enforced.

This type of apartment fraud is going on across California. This video proves it.

It’s organized, and it could destroy the California recall election integrity if not stopped and the people prosecuted.

Why would the post office be suspect? You can read about it in an article I wrote on the political corruption by postal employees HERE.

#2. Other Forms of Ballot Harvesting

California is one of 19 states where ballot harvesting is legal. But it’s being done in other states as well.

With ballot harvesting, ballot harvestors will be going to retirement homes (granny farming) and picking up ballots, a form of voter fraud.

They will also be looking for duplicate ballots at homes or homes that are empty because people have moved or are on vacation.

Most ballot harvesting is where one person, trained by the unions and pro-socialist organizations go door to door based upon data.

The data tells them which households have someone in it that is likely to vote against the recall election.

Then they go to that door multiple times until they find the person and are able to persuade them to give them the ballot and help them fill it out.

Here is a video of a ballot harvester who has gone to the household of parents not on the data list, but the adult child is. They only want to talk to those who would vote democrat. Click HERE to view.

So they will only talk to the son.

Listen to what they say.

#4. There’s Other Types Of Threats To An Honest Election. This Is The Biggest.

As I said, the post office union is Bernie Sanders type of supporters on steriods, probably the most politicized union in the United States. They have a core group of political activists who will do anything to help change the election.

Now the corrupt Los Angeles County Registrar of Voters has developed a mail-in ballot in Los Angeles where you can actually see how a person votes by looking at the ballot. In other words, the postal employees could destroy a ballot before it’s delivered to the election center if they vote “yes” on the California recall.

I’m waiting to see if other counties have the same illegal problem. Such holes are often used, but never in a place you can see a vote. This must be intential to help Governor Newsom.

Watch this video, and you’ll see how it’s being done and why it’s so corrupt. Click HERE to view.

Be sure to send this email out to everyone you know so they can be aware of this.

And do sign our petition to stop voter fraud.

It is having a big impact. But we need many more people to sign.

Order our book The Deep State: 15 Surprising Dangers You Should Know. It’s chapter on voter fraud is eye-opening.

Want to know how churches can do church ballot harvesting?