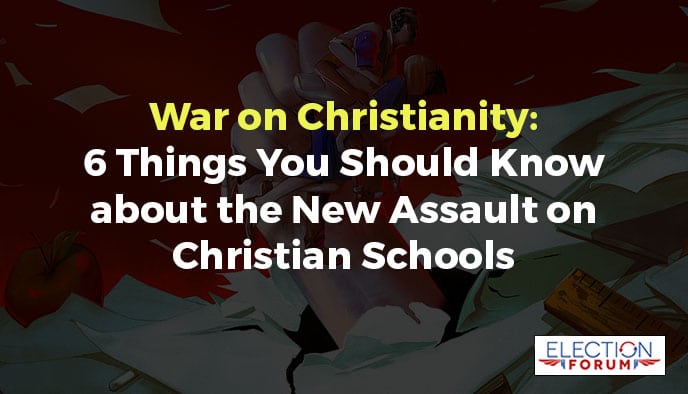 Across America, Christian parents in public schools, Christian schools and home schools have been under attack.

The latest assault is on a Christian school in which government bureaucrats are demanding the school change its Bible beliefs on sex to conform with the secular worldview.

Here are 6 things you should know about this latest assault on Christianity:

1. The Biblical worldview is an affront to non-Christians.

“For the word of the cross is foolishness to those who are perishing, but to us who are being saved it is the power of God. For it is written, ‘I will destroy the wisdom of the wise, and the cleverness of the clever I will set aside.’ Where is the wise man? Where is the scribe? Where is the debater of this age? Has not God made foolish the wisdom of the world? For since in the wisdom of God the world through its wisdom did not come to know God, God was well-pleased through the foolishness of the message preached to save those who believe.”
(1 Corinthians 1:18-21)

“And even if our gospel is veiled, it is veiled to those who are perishing, in whose case the god of this world has blinded the minds of the unbelieving so that they might not see the light of the gospel of the glory of Christ, who is the image of God.” (2 Corinthians 4:3-4)

2. Across America, Christian colleges, high schools and grade schools have faced lawsuits regarding their Biblical beliefs.

Parents, students and outside political groups have filed lawsuits against Christian schools’ codes of conduct that uphold a Biblical view of sexuality regarding things such as:

The Pacific Justice Institute (PJI) has defended the Christian schools and colleges in many of these lawsuits, including the River View Christian Academy case.

This was a raid that would be appropriate for a terrorist group – NOT a Christian school teaching God’s commandments and principles for living.

The raid was supposedly produced by false accusations of illegal drugs and weapons – of course none were found.

4. The school is run by a Christian group … for the benefit of troubled teenagers.

The school is run by the non-profit Teen Rescue and assists troubled teens. The school receives no government money.

The state of California contention that River View is not a private Christian school but instead an “unlicensed community care facility,” a category that would warrant further regulations.

The state wants to bring River View under supervision of the state’s Department of Social Services. A new state law (SB524) gives the state more authority to regulate boarding schools.

5. The California government wants to regulate the school out of business.

The regulations would force the school to give up its Biblical beliefs.

It’s another power grab by the secular government. The Deep State always wants to expand its power.

6. You can help stop this government tyranny and abuse of power.

Here are two things you can do to help:

What do you think? Email me at Craig@electionforum.org.