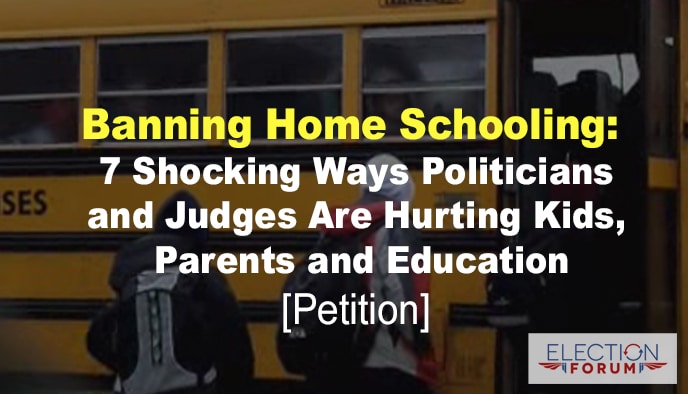 The end of homeschooling?

That’s what progressive judges and politicians want to see.

For example, … Maryland and California are the most recent states in which progressive politicians are attempting to regulate – and eventually destroy – home schooling.

Proposed legislation in both states would assume parents are guilty until they prove their innocence … guilty of child abuse, that is.

This is the new attitude of state lawmakers toward parents who opt to homeschool their own children.

Why? On what grounds?

Because David and Louise Turpin – the horrible Riverside County, CA couple who police say tortured their 13 children by chaining them to their beds, abusing and starving them – were registered with the state as homeschoolers.

Maryland and California lawmakers are not missing their opportunity to use a manufactured “crisis” to expand their bureaucratic power … attack people of faith … and destroy home schooling as an educational option.

If the proposed bills in the respective state legislatures are passed, the legal option of homeschooling will be reduced from a fundamental parental right to direct the education and school choice for their children … to compelled consent to government intrusion into homes throughout these states – without just cause.

Because of one tragic family situation, politicians and judges in other states want to do to these 7 shocking things to all parents who either already are homeschooling … or who are thinking about switching to home schooling:

The bills – AB 2756 in California and HB 1798 in Maryland – would create new rules, regulations and home inspections that:

On the surface, the new requirements in these bills may seem sensible and harmless … but they begin a process of government review … oversight … intrusion … and control.

They will effectively end home schooling in both Maryland and California.

Both bills allow government officials – for the first time ever – to enter a private home without having a reason to suspect there’s a situation in the home requiring their intervention.

The proposed legislation provides no protections against invasion of privacy by the home school inspectors once they are inside a home.

The authors of the proposed bill claim that the goal of the legislation is to “protect children” from parental abuse … yet the home inspections are to be conducted by appointment.

If a parent was committing child abuse and knew that an inspector was coming at a certain time … the parent would send the children out of the home on a “field trip” and remove any evidence of abuse before the inspector arrived.

The bill would be totally ineffective in preventing potential future abuse by homeschooling parents … and as already stated would open the door for greater regulation in the future.

Statistics on child abuse suggest the opposite: rates of abuse are much higher for children who attend public schools … including abuse by public school teachers!

But Maryland and California legislators don’t care about factual statistics…

They want homeschooling parents to have to prove to their satisfaction that they are not abusive to their own children.

In fact, the California legislature – because of the California Teachers Association union – refuses to pass legislation to stop predator teachers in the public schools.

If you live in California, see our petition to stop predator teachers here: https://www.electionforum.org/stop-teacher-predators-petition/

State legislators argue that the state has a responsibility to ensure that each child is in a safe learning environment.

No one ever publicly questions this assumption.

But is school safety really a state responsibility only?

Consider that a safe learning environment for school children should be potentially a shared responsibility … but in this order:

If parents, family and the local responsible entities abdicate their responsibilities to provide safe learning environments for children, the state will gladly step in and take over every aspect of education…

Judicial activists throughout the nation – with their progressive philosophy of complete government control – hate home schooling and want to see it stopped.

His ruling was later overturned in another court by a panel of judges.

In Dallas County a few years ago, a District Court judge ordered the removal of 7 children from a Texas homeschool family – in spite of no evidence of abuse or neglect.

The illegal attacks on this Christian family by activist judges and the Texas Child Protective Services lasted for over 3 years.

It’s a massive assault on:

Not only this … last year, California even battled against Christian colleges in the state…

Lawmakers pushed legislation that would have resulted in their destruction.

We need to show massive opposition to this government intrusion.