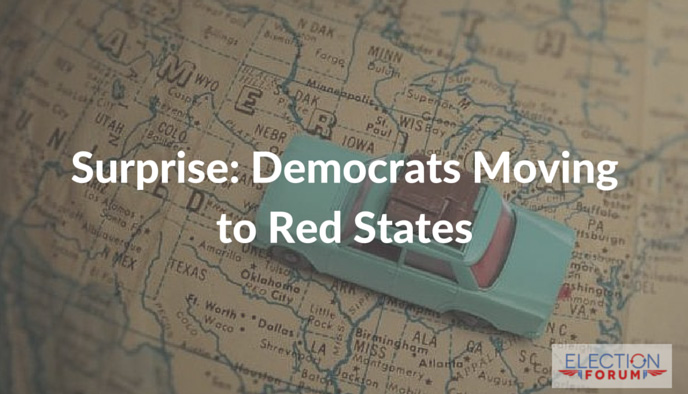 America is seeing a trend of mass exodus from liberal blue states into conservative red states.

All of them are red except for Colorado, which is purple.

And here are the top 7 exodus states:

The movement from blue to red states is clear and is not a coincidence. It cannot be explained away by factors like weather. Here’s why:

This trend of migration from blue to red states exists because liberal Democratic policies cripple the economy, hurt opportunity, kill jobs, and punish honest, hard-working individuals and families. The cost of living in liberal states is outrageous.

9 states have no income tax at all – and these states are creating jobs twice as fast as high income tax states.

In fact, the top 2 factors influencing this movement are (1) right to work laws and (2) how high the top income tax rate is.

The Democrats loudly claim that their policies help the American worker, middle class families, the poor, job creation, etc. But their emotional rhetoric is wrong and false – as the trend proves.

The people are “voting with their feet.”

This movement from blue to red states is changing the economic landscape of the U.S. And it is impacting these states.

The IRS statistics from 2013 show that interstate migration does in fact have a significant impact on states’ economies.  Here is the wealth added or lost by migration:

And, 5 of the 7 states with the biggest gains in income have no income tax at all: Florida, Texas, Arizona, Washington, and Nevada.

The movement of human capital is definitely making a difference to these states’ economies.

Human capital is so impactful on state economies because only people can create wealth. And wealth creation flourishes under policies that encourage and reward the creation of wealth rather than punishing it.

This very thing happened when Democrats from Massachusetts moved to New Hampshire.

It’s an injustice and a tragedy – Americans moving to red states to escape the economic oppression of liberal Democratic policies and enjoy the prosperity of red states – and then voting to destroy the very policies that helped create the prosperity they came to enjoy.