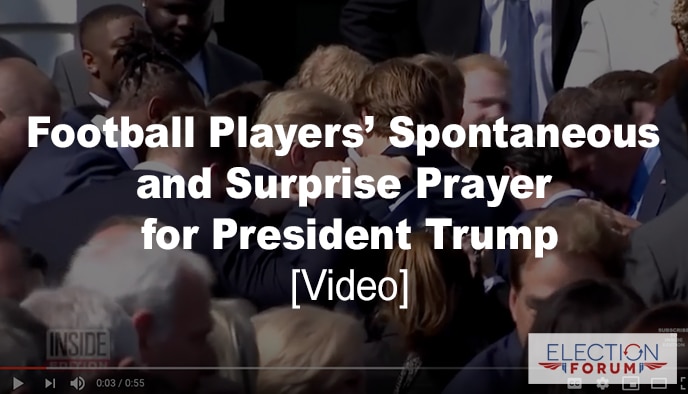 It was a spontaneous time of public prayer for President Trump…

It happened during the traditional, annual White House visit of the college football team that has won that year’s national championship.

The 2018 national championship was won by the University of Alabama in an exciting, dramatic overtime game last January.

After presenting the president with an Alabama football team jersey, helmet and football, several of the Crimson Tide football players spontaneously huddled around him and asked if they could pray for him.

The team’s punter, J.K. Scott, was the player who initiated the time of prayer by asking the president if he could pray for him.

Scott related in an interview that on the way to the White House he had prayed that God would glorify Himself on the trip.

He then heard a song containing the line, “Let the world sing a new song.” Scott said, “And I don’t know what it was about that, but the Lord kind of spoke to me about it, and there was a stirring in my heart that maybe He wanted to do something with the president…”

It was the team’s 5th national championship – and 5th visit to the White House – since Nick Saban became head football coach in 2007.

However, this year’s visit was the team’s 1st under President Trump … and the 1st time Nick Saban was invited into the Oval Office.

Because of the immense pressure of being President of the United States – and because of the continual attacks on his character and his policies by the progressive media and politicians – President Trump needs much prayer and support.

Many thanks to the Alabama football players who love God and desire to prayer for our president.

Watch this short video of the impromptu prayer huddle and a portion of an interview with the Alabama punter (about 1 minute).

For those who may be interested, here are some highlights from the 2018 national championship football game between the Alabama Crimson Tide and the Georgia Bulldogs – including the winning touchdown by Alabama in overtime after Georgia had taken a 23-20 lead. [Georgia is in red jerseys; Alabama is in white] 11 ½ minutes).