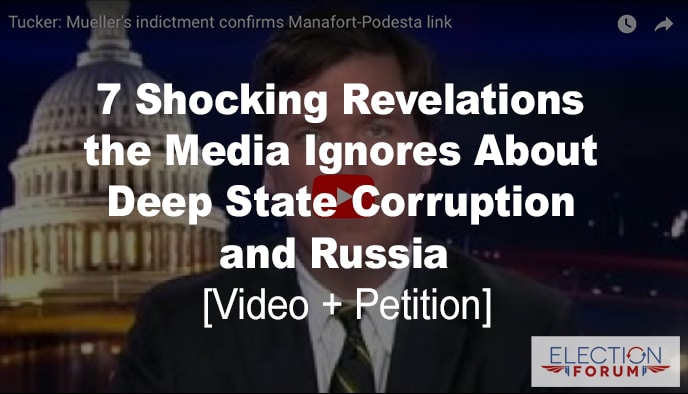 The media is ignoring or distorting the most shocking revelations about the Russian investigation.

Here are 7 shocking revelations you won’t see or read in the mainstream media or Facebook.

What isn’t well known is intelligence agencies like the FBI and CIA have politically weaponized FISA, with its secret court and secret warrants, to eavesdrop and destroy members of an opposing political party.

A FISA warrant was issued to eavesdrop on the Trump campaign, based on a fake dossier on the presidential candidate. From this was born the Left’s “Russia Collusion” narrative.

The fact that a sitting President, through his own private group, used money to pay for Russian intelligence and then use for the government to justify intelligence agency spying, is immoral and wrong.

Russian sources took advantage of this situation to try and damage the American election process by spreading its own propaganda. Russians loaded the dossier with misinformation, wrong dates and outright salacious lies about Trump.

No matter. If this was Just an “opposition research project,” why on Earth is the FBI funding it? It heightens concerns about the FBI’s independence from politics – as well as the Obama administration’s use of law enforcement and intelligence agencies for political surveillance.

Former FBI Director James Comey and the other intelligence agency chiefs like onetime Director of Intelligence James Clapper and former CIA Director John Brennan, showed their true political colors by releasing contents of the dossier to Hillary Clinton’s campaign and the media.

In this case, a FISA warrant was used to try to sway a presidential election in favor of one party over another. The Obama administration used the pretense of this dossier to get a FISA judge to issue a warrant and sign off on spying on an American opponent and his staff.

His charges stem from business dealings years before he entered the Trump campaign for three months.

If you agree the above is wrong, there is one thing you can now to stop this abuse of power.

This use of FISA is pure corruption, and a reason why FISA should be eliminated. FISA comes up for renewal Dec. 31. Tell your representatives in Washington NOT to extend it. You can call them at 202-224-3121. Or you can sign our petition to end FISA. CLICK HERE.

Watch this fascinating 3 1/2-minute video of Congressman Dana Rohrabacher explaining how the Paul Manafort indictment is meant to divert attention from Hillary-DNC corruption.

Watch this powerful 13-minute video by Tucker Carlson on the Paul Manafort indictment.