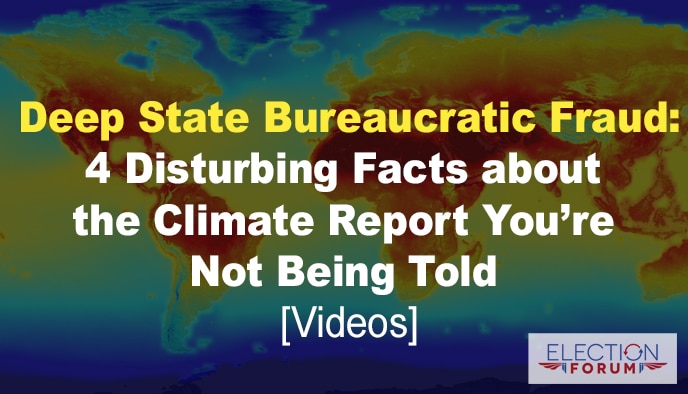 The biased media, Facebook and the press made this wild and unsubstantiated prediction their number one story…

They failed to say that Deep State bureaucrats from the Obama administration – not the White House – wrote the report and made the shocking claims.

Here are 4 disturbing facts the media and the Democrat politicians aren’t telling you:

The 4th National Climate Assessment report used biased and disproven facts, assumptions and misrepresentations about global temperature changes over the past 100 years.

Average global temperature data has been tampered with and altered to fit the global warming narrative.

Climate change scientists and global warming advocates ignore the fact that in the 1960s and early 1970s, there were climate “experts” and media elites predicting global cooling … even to the point of causing another ice age.

The primary objective of climate change scientists and global warming advocates is government regulations and increased funding for their “research.”

The National Climate Assessment Council produces the report from input gathered from 13 federal agencies … with contributions from 300 scientists.

Included in the 13 federal agencies are:

The employees of these bureaucracies – and the 300 contributing scientists – are not President Trump’s people or supporters. They are largely Bush and Obama holdovers…

They are part of the Deep State I expose in my book, The Deep State: 15 Surprising Dangers You Should Know.

They have a progressive agenda they are pursuing … an agenda calling for more government regulation over businesses and individuals … more government power and control … and less individual freedom and liberty.

And they are using taxpayer money to effectively neutralize President Trump and undermine his policies.

When a statement begins with a factual basis but ends with pure conjecture, the tendency is to accept the entire statement as factual.

Here’s an example from the report:

“The earth’s climate is changing faster than at any point in the history of modern civilization, primarily as a result of human activities.”

Notice the bait: While it may possibly be true that “the earth’s climate is changing faster than at any point in the history of modern civilization,” it’s pure conjecture that climate change is primarily a result of human activities.

“As many as 9,300 more people could die each year because of extreme heat or cold related to climate change by the end of this century … The range of disease-spreading mosquitoes and ticks will expand, as well as extreme weather events – all of which will bring additional mental health problems such as depression and even suicidal tendencies.”

So now we’re supposed to believe climate change is going to “bring additional mental health problems such as depression and even suicidal tendencies?”

And the media accuses President Trump of fear-mongering?

Here’s a CNN news report on their “takeaways” from the 4th National Climate Assessment Report (4 minutes).

Incidentally, I had to scroll through 18 pages of Google search results before the first article appeared exposing the falsehood of the climate report.

Google, Facebook and the biased media are distorting truth yet again.

This is what the progressive media and politicians do: they assume they know what President Trump’s motives are … and they report those assumed motives as news.

If President Trump hadn’t released it to the press – and the press had first heard about it from members of Congress – he would have also been accused of trying to “bury the findings” and keep them secret.

It doesn’t matter what President Trump says or does … he is painted in a negative light by the media either way.

In Chapter 12 of my book, The Deep State: 15 Surprising Dangers You Should Know, I talk about how the media cheerleads for the Deep State and gives a voice of support for its agenda.

In Chapter 3, “Government Agencies: Politicized and Transformed into Deep State Strongholds of Influence and Power,” you’ll see more evidence of how federal agencies use fear-mongering and scare tactics to increase their funding, their power, and their control over our lives.

You can order The Deep State: 15 Surprising Dangers You Should Know by clicking here.

There are links to order direct from me or from Amazon in either hardback or Kindle formats.