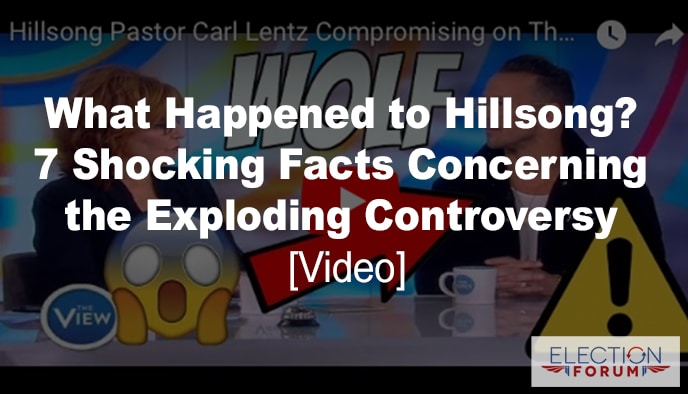 These are just some of the words evangelical Christians around the world found when the Pastor Carl Lentz of New York’s megachurch Hillsong refused to define sin and failed to give the gospel on the TV talk show “The View” (See video below).

And he was roundly criticized after he sidestepped a question about abortion.

He disappointed Christians worldwide by not speaking boldly in defense of unborn babies.

Unfortunately, the Hillsong church in New York, which has found itself in controversy in the last few years, just exploded again.

I think it was because he was more concerned with being liked, and being a friend to the liberal hosts, as opposed to telling the truth. The truth often offends. That’s reality.

If the pastor asked himself, “Am I the servant of Christ,” he would have articulated his position with God’s word in the forefront: Yes, abortion is a sin. And he could have explained sin and the cross.

When asked directly by co-host Joy Behar, “So, it’s not sin in your church to have an abortion?” Lentz responded, “That’s the kind of conversation we would have finding out your story, where you’re from, what you believe … I mean, God’s the judge. People have to live their own convictions … before I start picking and choosing what I think is sin in your life, I’d like to know your name kiwigambling.co.nz.”

Yes, God is the judge, but is that a fully truthful response?

Are we playing word games with God’s words?

God said, I knew you BEFORE I formed you in the womb!

That is a life!

“Before I formed you in the womb I knew you, before you were born I set you apart; I appointed you as a prophet to the nations.”

Most Christians and pastors are not well-trained for being under attack and challenged for their beliefs.

“But sanctify the Lord God in your hearts, and be ready always to give an answer to every man who asks you a reason for the hope that is in you, with meekness and fear.”

Preparation and training would not be hard. Since the world hates what we stand for … Since so many people want to tear down the message of the cross, pastors and Christians need to be prepared if they are going to be on the air.

Most pastors will do this. For example, Pastor Rick Warren of Saddleback Church, John MacArthur of Grace Community Church preach the gospel when interviewed.

Preach the gospel through good times and bad. It’s what we do. For example, during the natural disasters of hurricanes, or the man-made disaster of a church shooting, people were on TV and radio proclaiming Christ and Him crucified.

They were a testimony to the world. They didn’t give generalizations and feel-good statements. They didn’t ignore Christ or his message as Pastor Lentz did.

“As we have said before, so now I say again, if anyone preaches any other gospel to you than what you have received, let him be accursed.

“For do I now persuade men, or God? Or do I seek to please men? For if I still pleased men, I would not be a bondservant of Christ.”

Lentz sought to rectify his passivity by now saying he believes abortion is a sin, but that he chose to emphasize grace instead of sin.

“Recently in an interview I was asked directly if abortion was sin. I did not answer the question directly for a number of reasons and that caused some confusion about our stance as a church on this matter.

“I do believe abortion is sinful. Our prayer is that we can continue to help and love those that deal with the pain of regret from personal choices, rather than cast further shame and guilt on those already carrying so much and create a church that can teach people how to form convictions based on God’s word, that will be the driving force in all their decisions.

“I will continue to point people to Jesus, above all else, every opportunity I get. The story of God’s redemptive grace, available to all, is the best news available.”

Why didn’t Lentz articulate these very same points on TV?

“Live by your own convictions” is exactly what the abortion lobby wants to hear!

“So, because you are lukewarm — neither hot nor cold — I am about to spit you out of my mouth.”

God’s warning to Christians. Don’t be lukewarm. Be strong in your faith.

Say what you mean and mean what you say.

Take heed of 2 Timothy 4:3, because I see this trend in many popular “hip” churches.

“For the time will come when people will not put up with sound doctrine. Instead, to suit their own desires, they will gather around them a great number of teachers to say what their itching ears want to hear.”

Make sure the church you attend is biblically sound.

Watch Pastor Carl Lentz’s interview on “The View” and tell me what you think.

38 Comments on “What Happened to Hillsong? 7 Shocking Facts Concerning the Exploding Controversy [Video]”