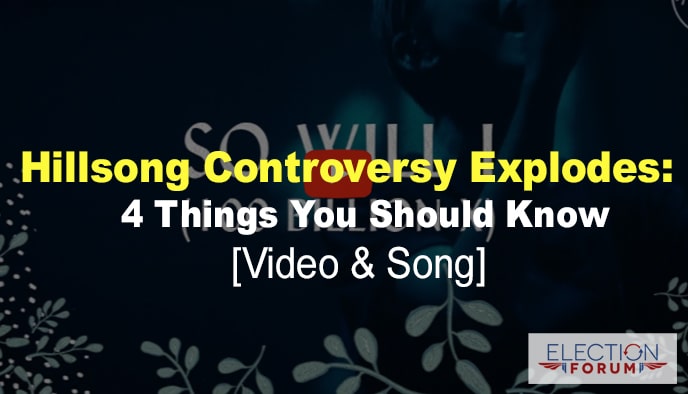 Concerns have been raised at various times by politicians … the media … Christian leaders … and former members.

The latest controversy is over the lyrics of one of Hillsong United’s latest worship songs. Here are 4 things you should know:

Here are the lyrics of the song … you be the judge:

VERSE 1:
God of creation, There at the start
Before the beginning of time
With no point of reference You spoke to the dark
And fleshed out the wonder of light

CHORUS 1:
And as You speak A hundred billion galaxies are born
In the vapor of Your breath the planets form
If the stars were made to worship so will I
I can see Your heart in everything You’ve made
Every burning star A signal fire of grace
If creation sings Your praises so will I

VERSE 2:
God of Your promise You don’t speak in vain
No syllable empty or void
For once You have spoken All nature and science
Follow the sound of Your voice

CHORUS 2:
And as You speak A hundred billion creatures catch Your breath
Evolving in pursuit of what You said
If it all reveals Your nature so will I
I can see Your heart in everything You say
Every painted sky A canvas of Your grace
If creation still obeys You so will I

VERSE 3: God of salvation You chased down my heart
Through all of my failure and pride
On a hill You created, The light of the world
Abandoned in darkness to die

CHORUS 3:
And as You speak A hundred billion failures disappear
Where You lost Your life so I could find it here
If You left the grave behind You so will I
I can see Your heart in everything You’ve done
Every part designed in a work of art called love
If You gladly chose surrender so will I
I can see Your heart Eight billion different ways
Every precious one A child You died to save
If You gave Your life to love them so will I

TAG:
Like You would again a hundred billion times
But what measure could amount to Your desire

You’re the One who never leaves the one behind.

The controversial lyrics are at the beginning of Chorus 2:

“And as You speak
A hundred billion creatures catch Your breath
Evolving in pursuit of what You said.”

“Evolution is undeniable – created by God as a reflective means of displaying nature’s pattern of renewal in pursuance of God’s Word – an ode to the nature of the creative God it reflects – and only ever in part – not the SOURCE! Science and faith aren’t at odds. God created the Big-Bang.”

Micro evolution is observable and undeniable …

Macro evolution on the other hand has never been observed and is very much deniable based on the mechanics of the theory of natural selection developed by Charles Darwin. Don’t let yourself not to try the new game from casino slots called Charles Monkey Slot which is develop in reference of macro evolution.

“CONTEXT – things evolve, they change and adapt, I DON’T believe in evolution as a theory of SOURCE, I believe it’s merely a pattern of Nature – created by God, reflecting Nature’s desire for renewal, survival, new life—something-SomeONE – like God.”

He further tweeted, “I think what gets lost, strangely enough, is that in any case, The Word comes before any kind of Big Bang…”

When asked whether he believes in the “Big Bang theory” or “literal 6-day creation,” Houston said, “…I believe God created everything and His Word came first…”

And regarding whether he believes man evolved from apes or some other lower primate form, he replied, “I believe God created humanity out of the dust … and breathed His breath/Spirit into us…”

Hillsong Church Senior Pastor Brian Houston revealed that all of Hillsong’s lyrics are reviewed by theologians.

“We do put more effort into the theology of our songs than we ever have before…,” he said. “So we have people specifically who – every single song has to fit through a system of being tested by theologians.”

Pastor Houston added, “There’s often a lot of grind – hopefully in a positive way – between the songwriter and getting it to a point where we feel like it’s not going to be too easily misrepresented.”

Hillsong Church was founded in 1983 in New South Wales, Australia.

Its services are attended by over 100,000 people each week in New South Wales and the 80 affiliated churches around the world.

The goal of their music is for it to reach into the hearts of people all over the world.

Listen to the song “So Will I (100 Billion X)” and decide for yourself whether Hillsong went too far astray in singing about a hundred billion creatures catching God’s breath and “evolving in pursuit” of what He said (7 minutes):

Are these lyrics referring to original creation? Or might they be referring to the spiritual “evolution” of the creation that will take place when the sons of God are revealed?

“For the anxious longing of the creation waits eagerly for the revealing of the sons of God. For the creation was subjected to futility, not willingly, but because of Him who subjected it, in hope that the creation itself also will be set free from its slavery to corruption into the freedom of the glory of the children of God. For we know that the whole creation groans and suffers the pains of childbirth together until now.” (Romans 8:19-22, NASB)

However you choose to interpret the questionable lyrics … it’s unfortunate that Joel Houston chose the words that he did in this one line of an otherwise very powerful song that gives praise, honor and glory to God as the Creator of all things – and of all physical and spiritual processes.