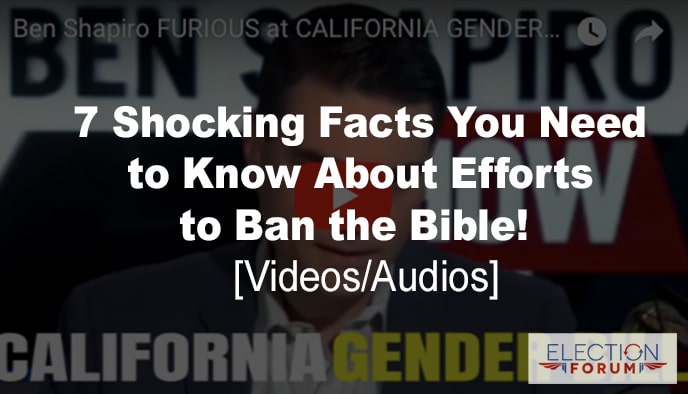 Banning Christian books … seminars and conferences … even the Bible.

It’s way “over the top” in infringing on the First Amendment protections regarding freedom of speech and the free exercise of religion … but they’re dead serious.

The nation is shocked as the California State Assembly has passed a bill making “advertising, offering to engage in, or engaging in sexual orientation change efforts with an individual” a fraudulent business practice – subject to fines and penalties.

The bill explains the meaning of “Sexual orientation change efforts:”

“any practices that seek to change an individual’s sexual orientation. This includes efforts to change behaviors or gender expressions, or to eliminate or reduce sexual or romantic attractions or feelings toward individuals of the same sex.”

Here are 7 important facts you need to know about the long-term purposes and consequences of this legislation:

It censors a specific message – that an adult who is experiencing unwanted same-sex attraction or gender identity confusion can find help regarding those issues.

The breadth of the censorship is staggering:

Fact #2. A financial transaction is what triggers the censorship restrictions of the bill.

A person – or organization – that is paid by a consumer for goods or services cannot engage in any practice – including pure speech – that tells the consumer that he or she either can or should overcome unwanted same-sex attraction or gender identity confusion.

This law – because of its broad wording – will be used against Christian Colleges to deny their Title IX exemptions unless they remove any mention of sexual orientation and gender identity from their curriculum as well as from their student – and faculty – codes of conduct.

The distinctiveness of Christian higher education will be destroyed as colleges will be forced to hire LGBTQ faculty … and admit LGBTQ students – or risk having to go out of business for lack of funding and grants.

Fact #3. This law unconstitutionally regulates speech based on its content and viewpoint.

But it allows counseling and speech that provides “acceptance, support, and understanding of clients or the facilitation of clients’ coping…”

Example: A wife and mother who experiences same-sex attractions but who also believes that acting on those feelings would be inconsistent with her sincerely-held religious beliefs – and detrimental to her family – would be unable to get professional counseling under AB 2943.

She wouldn’t even be able to buy a self-help book on overcoming her unwanted same-sex feelings.

Fact #5. The authors of the bill are promoting their ideology using the power of the state – denying the truth of transformation.

Evan Low – a homosexual legislator – claims the purpose of the bill is to classify the practice of gay conversion therapy as a fraudulent business practice.

He believes conversion therapy is harmful, and people who advertise or sell the misleading and fraudulent therapy should face a legal consequence.

“This notion that we would accept as a legal practice that conversion therapy works is antithetical to my very existence in this body,” Low stated.

“You can still try to pray the gay away if you’d like, but it hasn’t proved to be effective. To advertise that you can change someone’s orientation is simply that—fraudulent.”

Because of their faith they’ve been changed…

Many are now married and have children.

Fact #6. The bill is deceptive and very dangerous.

This is a calculated strategy by the bill’s sponsors and by the progressives in the State Legislature to make the prohibitions seem less threatening to Christian businesses and ministries.

Enforcement will most likely be sporadic and inconsistent at first … with fines and penalties becoming more severe and more broadly applied over time.

No matter what specific ministries or books or transactions or people or situations may be given exemption from this law, it still prohibits freedom of speech and freedom of religious expression and practice.

Remember the ancient Arabian proverb (paraphrased): Do not allow a camel to put his nose in your tent, for soon you will have a camel in your tent.

Fact #7. The ultimate goal of AB 2943 is to cripple the gospel … deny truth … and maybe even ban the sale of the Bible.

If signed by Governor Brown, the bill will lead to countless lawsuits by the state … the ACLU … Equality California … and other groups and individuals against Christian ministries and people of faith.

Even the Bible would be under attack since it contains verses that the members of the LGBT caucus … the other progressives in the state legislature … and Governor Brown … claim are outside what they consider “acceptable teaching” on sexuality.

They claim the Bible promotes hate speech against gays, lesbians and transgenders.

Watch for our petition to stop this bill … I’ll send it to you next week.

Pay special attention to the comments by Assemblyman James Gallagher (R-Yuba City) at the 7:25 mark.

But the clear wording of the bill says otherwise if a financial transaction is involved … And you can be sure that progressives who want to shut down Christian counseling ministries … or outlaw certain Christian college curriculum … or prohibit pastors from preaching sermons on certain topics … are not going to care what the authors of this bill say they intended. They are going to press their lawsuits based on what the bill clearly says.

5 Comments on “7 Shocking Facts You Need to Know About Efforts to Ban the Bible! [Video/Audios]”