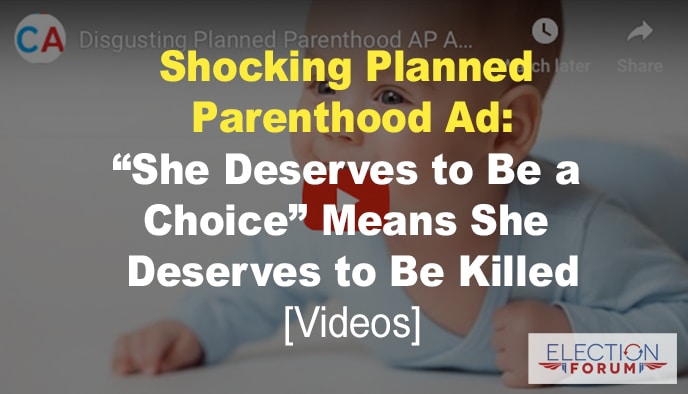 A short video of a live baby girl – smiling and giggling … with a lullaby playing softly in the background – is interrupted three times by a black screen with white text:

“She deserves to be … wanted.”

The implication is unmistakable: she deserves to be aborted and murdered.

You can watch the 40-second ad below. CAUTION: It will turn your stomach…

Texas Governor Greg Abbott posted his horrified reaction on Twitter: “This has to be a joke. If not, it is truly jarring.”

Actress Patricia Heaton tweeted, “Um…which ghoul at @PPFA decided this was a good idea? ‘Let’s show a beautiful infant girl, then list the criteria she needs to meet in order to avoid being aborted!’”

Pop singer Kaya Jones warned her Twitter followers: “Please brace yourself. This is the most demonic thing. Evil pure evil.”

That claim is false.

It’s a sad commentary on the moral decay and ambivalence of American society that even with a Republican majority in both the House and the Senate for the past 2 years, the Trump administration hasn’t been able to muster enough congressional support to defund Planned Parenthood.