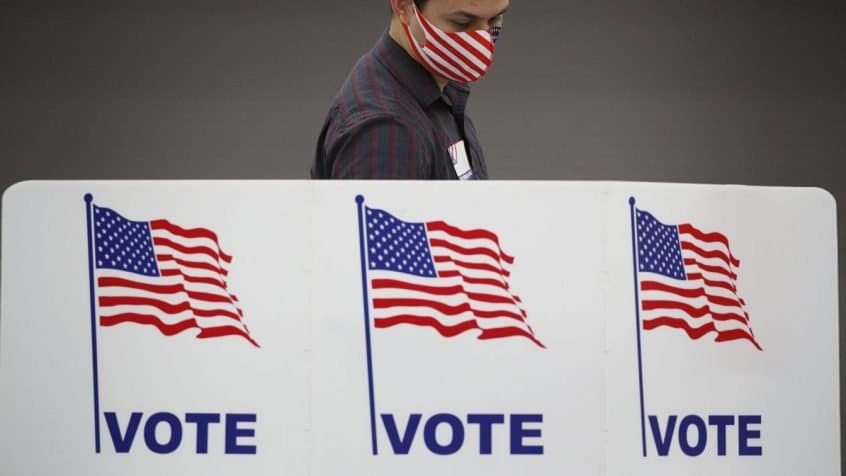 Opening the door to voter fraud.

That’s exactly what H.R. #1 does…and unless you help us now, it’s going to pass.

Everybody should want honest elections.

Everyone should want fair and free elections.

It’s a partisan bill designed to guarantee that every election for the foreseeable future will be won by radical Democrat Socialists.

This is probably the most dangerous bill that has been proposed and must be stopped.

H.R.1 is called the “For the People Act of 2021.” This legislation is not for the people at all. It’s for the Democrat politicians.

This bill – if it passes in the Senate and is signed by President Biden – will bring about a disastrous overhaul of our election system… and will destroy the integrity and fairness of all future elections in the United States.

It takes all of the worst election law changes made illegally by blue states in 2020 and nationalizes them by making them part of federal law for all states.

Here are 29 reasons you should be very afraid and want to help us oppose the bill:

States must provide for an absentee vote-by-mail in elections for Federal office, and may not require an individual to provide any form of ID as a condition for obtaining an absentee ballot.

Voter ID is the only way to dramatically prevent voter fraud.

2. H.R.1 mandates universal, no-fault absentee ballots – everyone gets a ballot by mail.

The legislation does away with the witness signature or notarization requirement on absentee ballot applications. Everyone gets a ballot – even with the massive inaccuracy of the voter registration rolls of double listing, people who have moved and dead people. This last election gave 450,000 bad addresses were sent in California alone for voter fraud. All states, the voter rolls are a mess.

The bill permits a voter to “designate any person to return a voted and sealed absentee ballot to the post office, a ballot drop-off location, tribally designated building, or election office so long as the person designated to return the ballot does not receive any form of compensation based on the number of ballots.”

With ballot harvesting, organized politically trained harvesters can deliver 100-1,000 ballots. No one knows who they are. No audit trail.

States may not set any limit on how many voted and sealed absentee ballots a designated person may return.

This means that anyone giving personal information to a designated government agency – such as the Department of Motor Vehicles, Obamacare, welfare, food stamps, a public university or a social service agency – would be automatically registered to vote. Affirming one’s citizenship is not a requirement.

In fact, it fully opens the door to millions of ineligible/non-citizens to vote.

19 states currently have some form of AVR.

The bill requires states to accept any mail-in ballot postmarked before or on Election Day if it is received within 10 days after the election.

States may extend this deadline but may not reduce it.

This is perfect for ballot harvesters and opens the door to voter fraud.

The bill will force states to allow individuals to vote without providing any ID.

States may only ask voters to sign a statement in which they claim they are who they say they are.

Voter I.D. is the #1 way to prevent voter fraud and currently required in many states.

7. H.R.1 prevents election officials from removing dead, non-resident or otherwise ineligible voters from registration lists – or from confirming the eligibility of voters.

The bill makes it illegal for election officials to:

8. H.R.1 prohibits the publication of “misleading information” about elections, silencing opposition to the Socialist Democrats.

The bill makes it a federal crime to “communicate or cause to be communicated” any information that is knowingly false or that is designed to discourage voting.

Violating this provision carries a prison sentence of up to 5 years.

This is designed to silence conservative, libertarian and Christian groups.

The bill states, “The United States is the only democratic country that denies both voting representation in the national legislature and local self-government to the residents of its Nation’s capital.”

The bill also appoints a commission that would work for congressional representation and presidential electoral votes.

This means there will be two new Democrat Senators and at least one Democrat Congressperson.

10. H.R.1 allows politicians to use campaign funds for personal use.

The provision is called the “Help America Run Act.”

Unions, community groups and organizations mobilizing for the election will recruit same day voters, opening the door for voter fraud.

The bill requires that same-day voter registration be implemented in time for the 2022 midterm elections.

12. H.R.1 usurps the authority granted to state legislatures in the Constitution to set election rules for federal elections in their individual states.

Article I, Section 4 of the Constitution reads:

“The Times, Places and Manner of holding Elections for Senators and Representatives, shall be prescribed in each State by the Legislature thereof; but the Congress may at any time by Law make or alter such Regulations, except as to the Places of chusing Senators.”

This bill will give Congress the power to overrule election laws in all 50 states – including determining where voters are allowed to cast their ballots in Federal elections, which is clearly prohibited by the last phrase of Section 4.

The bill will protect non-citizens from prosecution if they are automatically registered to vote. Agencies that provide automatic voter registration are not required to keep records of who declined to affirm their citizenship.

This provision is called the “Democracy Restoration Act.” It says that all felons can vote unless they are “serving a felony sentence in a correctional institution or facility at the time of the election.”

The bill will also reduce federal dollars to prisons in states that do not register ex-convicts to vote.

The bill states, “Each State shall allow individuals to vote in an election for Federal office during an early voting period which occurs prior to the date of the election, in the same manner as voting is allowed on such date.”

Each county in each state must provide “in-person, secured, and clearly labeled drop boxes at which individuals may, at any time during the period described… drop off voted absentee ballots in an election for Federal office.”

The drop-off boxes must be “available to all voters on a non-discriminatory basis” and be available “during all hours of the day.”

17. H.R.1 requires states to allow voter registration for those under 18.

The bill requires states to carry out plans to “increase the involvement of individuals under18 years of age in public election activities in the State.”

18. H.R.1 requires states to get permission from the federal government before making any voting rules changes.

The bill criminalizes “hindering, interfering, or preventing” anyone from registering to vote or from voting – whether or not they have any identification.

This would take power away from state legislatures.

There is also evidence showing that “independent” redistricting commissions are not really independent, but are run by Democrat Socialists for their own advantage.

The bill establishes a 10-member commission – only 4 of whom would be selected by the minority party.

The commission will study elections and produce a report after 18 months making recommendations for improving the election process.

The bill codifies the Democrats’ DISCLOSE Act which will restrict corporate participation in elections.

Republicans object to the bill’s transparency requirements, which they say will be a violation of free speech rights.

This is a clear violation of the separation of powers…

The bill states, “The Supreme Court’s misinterpretation of the Constitution to empower monied interests at the expense of the American people in elections has seriously eroded over 100 years of congressional action to promote fairness and protect elections from the toxic influence of money.”

The bill goes even further, recommending that “the Constitution should be amended so that Congress and the States may regulate and set limits on the raising and spending of money.”

Called the “Stand By Every Ad Act,” this provision will prevent campaign funds from covering any form of advertising over the internet.

This will increase the cost of campaign advertising, as internet ads are cheap compared to other forms of advertising.

The bill requires institutions of higher education to hire an official to inform students about elections and encourage students to register to vote.

Government grants will be given to institutions that have a high voter registration rate.

The bill prohibits “a chief State election administration official” from taking “an active part in political management or in a political campaign with respect to any election for Federal office over which such official has supervisory authority.”

26. H.R.1 changes the rules regarding conflicts of interest for the president and vice president.

It requires the president or vice president to divest all financial interests that could pose a conflict of interest either for them, their families, or anyone with whom they are negotiating or who is seeking employment in their administration.

The bill states, “Not later than the date that is 15 days after the date on which an individual becomes a covered candidate, the individual shall submit to the Federal Election Commission a copy of the individual’s income tax returns for the 10 most recent taxable years for which a return has been filed with the Internal Revenue Service.”

28. H.R.1 changes the composition of the Federal Elections Commission (FEC).

Currently, the FEC is composed of 6 members – 3 Democrats and 3 Republicans.

The bill decreases the number of FEC members from 6 to 5. As many as 4 out of the 5 members can be associated with a single political party.

29. H.R.1 limits access to federal courts when challenging the legislation.

The bill mandates that any lawsuits challenging the constitutionally of the legislation may only be filed in the District Court of Appeals for the District of Columbia – one of the most radically left-leaning appeals court in the nation.

The bill also requires all plaintiffs “to file joint papers or to be represented by a single attorney at oral argument.”

H.R.1 never went through a committee in the House, so Republicans never had the chance to offer comments during the drafting of the bill.

Nancy Pelosi took the legislation straight to the House floor for a vote without allowing any time for debate!

Bottom line – H.R.1 is another naked power grab by the Democrats.

This bill is not about eliminating unnecessary obstacles to voting. It is actively encouraging millions of illegally cast votes while making it impossible to verify which ballots are legal and which are illegal.

Tell them the “For the People Act” is NOT for the American people, it’s for the Democrat politicians who want to:

A massive, organized effort in support of this legislation is flooding the Senators offices. Your call will not only help us offset their effort, it will help us stop this bill.

Please call today. This legislation will end election integrity in the U.S. forever and must not be passed by the Senate!

Watch this 4-minute video of House minority leader Kevin McCarthy (R-CA) speaking on the floor of the House of Representatives about some of the sinister provisions of H.R. 1.

5 Comments on “Special Report: The Most Dangerous Bill Ever? 29 Reasons H.R. 1 Eliminates Future Election Integrity Permanently [Video and Action Plan for You]”