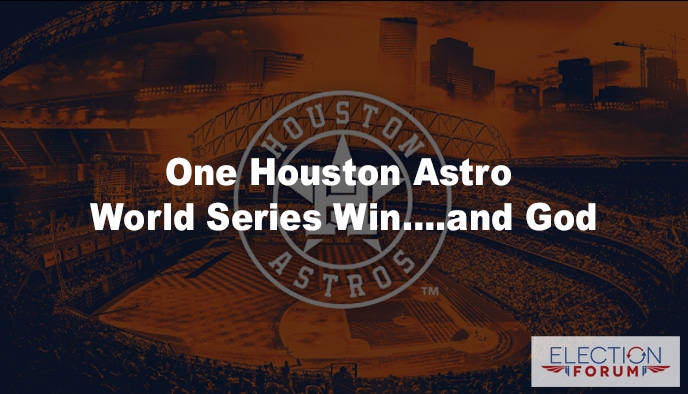 “To achieve success wasn’t to get into the major leagues or have the best season in the world. The best success is to live your life the way God wants you to.”

Jose Altuve said this after the Astros had defeated the Los Angeles Dodgers in Game 7 to win the 2017 World Series.

Jose Altuve plays 2nd base for the Houston Astros. He’s only 5’6” tall, and was once told he’d never make it to the major leagues.

He not only proved his critics wrong…he won the American League’s 2017 Most Valuable Player (MVP) award!

Jose said, “Every morning when you wake up you have to thank Him for just another day.”

He also said, “…if you can be good with God, then I think you will have success in your life.”

Center fielder Colby Rasmus is also an outspoken believer…and there are probably others as well.

There are two team chaplains, one for the Spanish-speaking players, one who serves as the English-speaking chaplain.

The wife of one of the chaplains ministers to the players’ wives and girlfriends.

When the team is playing at home, the chaplains conduct a Bible study each Sunday in the family room next to the clubhouse at Minute Maid Park.

The Astros front office also sponsors a Faith and Family Night each season, featuring worship music and testimonies by players.