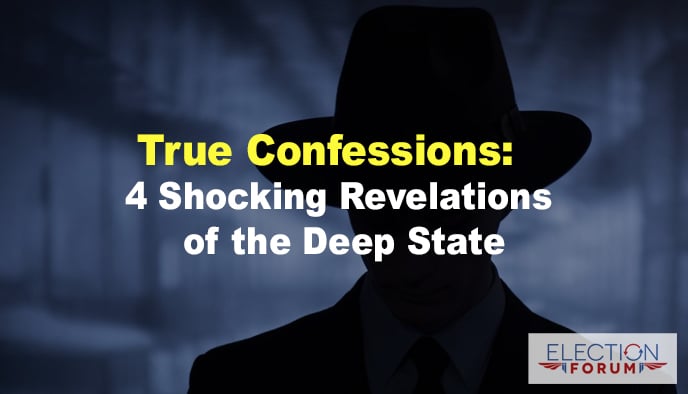 4 Shocking Revelations of the Deep State

The very mention of a ‘Deep State’ has been scoffed at and ridiculed by progressive politicians and by the media.

They deny there’s any plot to impose progressive ideology and progressive policies on all Americans … and that any and all means available are utilized to thwart and resist conservative values.

Here are 4 shocking and disturbing revelations about the Deep State brought out into the open by a controversial op-ed in The New York Times:

There’s no longer any doubt…

The accusation that it’s merely the product of wild-eyed conspiracy theorists has been debunked and laid to rest.

The author of the anonymous The New York Times op-ed not only reveals that the Deep State exists and that it’s alive and well … he (or she) details how the Deep State is operating within the Trump administration to “protect the country” from the president constitutionally elected by the will of the voters in 2016.

Some executive branch Deep State operatives – including White House staff members – are career bureaucrat holdovers from the Bush and the Obama administrations.

Some may also be President Trump appointees who at heart are “Never Trumper’s” … or lied to obtain their positions.

Some also may be staffers who were hired by Trump appointees … or are career bureaucrats.

Deep State operatives won’t hesitate to lie about their political philosophy or their loyalty to President Trump in order to secure employment in the administration.

He can only fire presidential appointees. He can’t fire career staffers because they are government employees – not appointees – and are protected by the American Federation of Government Employees (AFGE) labor union.

In Chapter 3 of my book, The Deep State: 15 Surprising Dangers You Should Know, I describe the operation and the reach of the Deep State within the regulatory agencies of the executive branch of the federal government.

You can order the book here: https://deepstatebook.com/

The op-ed is full of unsupported innuendos and contradictory statements.

Why would The New York Times publish such a sharp attack of President Trump and his agenda anonymously? How does this stimulate rational debate? How does it benefit the nation?

It performs a disservice to political debate. No one can debate with … or ask for supporting evidence from … an anonymous source.

The many false and contradictory statements in the op-ed destroy its credibility as an article to be taken seriously.

For example, the author claims the internal “resistance” wants the Trump administration to succeed, but Trump is described as a liability and a hindrance to all successes that have already taken place. “…successes have come despite – not because of – the president’s leadership style, which is impetuous, adversarial, petty and ineffective.”

But the “steady state” IS the Deep State! It’s the unelected bureaucracy that wants to maintain the status quo, expand government power and subvert the will of the people by undermining the representatives elected by the people.

The author of the op-ed says, “the president continues to act in a manner that is detrimental to the health of our republic.”

These are strange words, considering the fact that the author – and all those in the Trump administration who are resisting his agenda – are not advocating a republic at all.

In a republic, the people hold the power of government, not “senior staff officials” or other unelected bureaucrats.

The people elect representatives who are duty bound to govern on their behalf. If they do not do so, the people have the power to fire them in the next election.

The people elected Donald Trump as their president because of his promise to “Make America Great Again” by:

Americans did not hire so-called “senior officials.” We have no way to fire them for not supporting the agenda of the man who was elected specifically because of his campaign promises and his agenda for the country.

The op-ed author and The New York Times are the ones who are acting “in a manner that is detrimental to the health of our republic.”

Don’t forget to buy my book, The Deep State: 15 Dangers You Should Know, if you haven’t already. Click here to order: www.deepstatebook.com

2 Comments on “True Confessions: 4 Shocking Revelations of the Deep State”